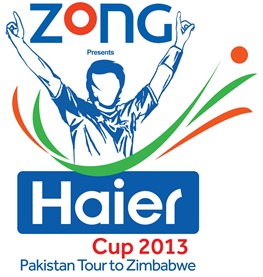 Zong has announced the support for Pakistan and Zimbabwe series. The telecom company is the presenting sponsor of this enthralling event to be held in Zimbabwe from 23rd Aug’ 2013 to 14th September’ 2013.

Zong has a long association with sports and has previously taken many initiatives to support sports’ activities in Pakistan including their collaboration with Manchester United Football club. The company has been involved in supporting various polo and golf tournaments like Shandur Polo Festival and Chief of Naval Staff Amateur Golf championship.

“It gives us great pleasure and pride to announce Zong’s association as the Presenting Partners of the Pakistan-Zimbabwe series. We have been associated with cricket in the past as well and wish both the teams all the best and look forward to a very competitive series.

We are a cricket loving nation and we all share a bond of mutual affection and passion for this game. Zong keeping its legacy to promote sports in Pakistan has sponsored this series as part of our support for promoting this great game.”

The series would include two T-20 matches, 3 ODIs and two test matches. Cricket experts think that this series would allow Pakistan to test out players before upcoming series with tougher teams like South Africa and Sri Lanka.