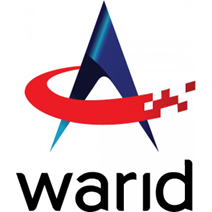 With the changing dynamics of Social Media in Pakistan, it is observed that Twitter is also getting very popular in the country. There are number of businesses in Pakistan using Twitter as medium of social contact/information.

And the news is that Warid Telecom has been able to achieve the highest twitter following, which has reached to 11,135 followers.

Twitter is an online social networking service and microblogging service that enables its users to send and read text-based messages of up to 140 characters, known as “tweets”.

The service rapidly gained worldwide popularity, with over 500 million registered users as of  2012, generating over 340 million tweets daily and handling over 1.6 billion search queries per day.

Since its launch, Twitter has become one of the ten most visited websites on the Internet, and has been described as “the SMS of the Internet.

Twitter is now intensively used by Pakistani brands to reach out to their customers, listen to them, share feedback, resolve their problem and just to say hello to them.