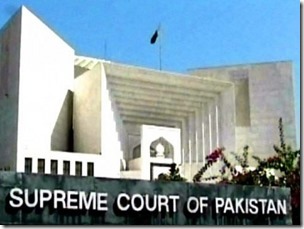 The Supreme Court of Pakistan yesterday asked the finance secretary to submit a detailed report that how Rs. 62 billion were withdrawn from Universal Services Fund (USF) accounts with an executive order.

A three-member bench of the Supreme Court, headed by Chief Justice Iftikhar Muhammad Chaudhry including Justice Jawad S Khawaja and Justice Sheikh Azmat Saeed, directed this during hearing of a case pertaining to delay in awarding 3G licences to telecom companies.

Justice Jawad S Khawaja remarked that the amount withdrawn from USF could only be spent for expansion of IT network in the country as it is not a revenue.

He remarked that according to the constitution only revenue could be deposited in the national exchequer.

It maybe recalled that government had moved over Rs. 50 billion (or Rs. 62 billion to be exact) of Universal Service Fund to Ministry of Finance to pay off circular debts.

Largely opposed, the move was not challenged by cellular companies in the court for reasons known to no one. However, since the matter has been discussed in the court, it appears that legal status of moving the money from USF to Finance Ministry will be judged and maybe reversed too.

The Supreme Court adjourned the case till August 6.

It maybe recalled that USF money is collected from telecom operators equalling 1.5 percent of their yearly revenues. This money is then used by the USF to deploy telecom services in far-flung and rural areas of the country by subsidizing the infrastructure.

Ministry of IT, during its media briefings, has justified the move by saying that money is just moved to State Bank of Pakistan, and is not used anywhere. However, ministry never clarified about the surplus that USF money used to earn while sitting in commercial banks, which will now go into Government hands.

Ministry of IT and Telecom also says that since money was not being used by USF and it was hence pointless for it to be stored in commercial banks. On other hands, Ministry never tells that why USF money was not used by the company, and that why USF was unable to disburse the funds.

Apparently, instead of arranging the disbursement of fund, i.e. making USF functional, government opted to take the money away from it.

Just for the records, USF money isn’t tax-payers’ money. It is a contribution made by cellular companies for development of ICT and should be disbursed entirely for spreading ICT services in the country, as early as possible..

The post Transfer of USF Funds to Finance Ministry Questioned by Supreme Court appeared first on .