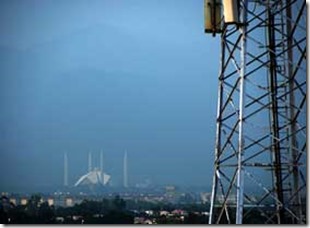 A congratulations is in order for you and your party, and apologies that I had not been able to convey it earlier. It has been a historic win for PML(N). I would also like to congratulate you on receiving the portfolio for IT and Telecommunications in Pakistan. It is indeed a great responsibility and being given charge of a sector which has the potential to transform the whole country is a great honour and opportunity.

The issues you face are pressing. I think first and foremost 3G is a huge problem that must be resolved. At a time when the world is moving to 4G LTE, we are still debating over 3G. It is a sad state of affairs.

The previous government made many commitments for the auction of 3G spectrum, the last said the auction would be completed by the end of 2012. Of course it was a huge failure on their part. I hope that you are able to meet yours. Did you know that Afghanistan already has 3G? There are 70 million users of 3G in India alone? This was also pointed out in a post by former CEO of the Universal Service Fund, Parvez Iftikhar.

A fund whose finances as you might know have been transferred to the Ministry of Finance even though it is not publicly financed. Apart from 3G, it is also extremely important to being planning of deployment of 4G LTE. We are only playing catch up at the moment.

Apart from this, ICT implementation across our government and public offices is a huge concern. Modernization and computerization of processes must be done to ensure transparency and public empowerment. Processes also need to be made easier for everyday consumers. We can’t even pay our bills or taxes online, when the same can be done in many other countries. Indians can book their train tickets on their computers and buy them too!

Yet while all these issues are talked about and reiterated over and over again. I want to talk to you about a very specific issue that is privacy and cyber-freedom! The internet by it’s very nature is meant to be open and expressive. It is a liberating invention which provides everyone to express themselves.

We all tweet and upload statuses on Facebook. We upload pictures and have online discussions. Similarly mobile phones and the services we use on them are a liberating experience. We have a right to privacy on what we use these services for. We also have a right to use all the services that are on offer.

Might I stress on the word service! It is almost a year now that YouTube has been closed in Pakistan. Well to be honest it is no open secret that it is still accessible through a host of proxy websites and VPN services. As I said, the internet by it’s design is meant to be open and non-restrictive. I was reminded of this again when like last year I tried to stream Tarawihs from Mecca. As you will be aware that Saudi Arabia not only allows YouTube but also works with them to ensure that a live transmission of both the Holy Mosques in Mecca and Medina are available to stream worldwide from YouTube.

I am reminded again that YouTube is not allowed in Pakistan when I try to access lectures from my alma mater online. As you are aware Cambirdge, Harvard, MIT, Stanford and many other leading universities upload most of their lectures now to YouTube. Did you also know that open universities in Pakistan like Virtual University and Allama Iqbal Open University have been greatly impacted by this closure because most of their lectures were uploaded and available on YouTube.

But perhaps, as most of us are already aware, that the closure of YouTube is not just because of one blasphemous video which if you so choose can block access to without much of a hassle. It is also not because Google refuses to block that video in Pakistan, which it does not! As it has already blocked it in many other Muslim countries.

Sources in Google have told me that the Pakistani Government before you has been happy with the closure of YouTube and their condition for unbanning it is to have power to block politically incriminating videos. That has perhaps been a real point of contention.

Sources in Google have told me that previous Pakistani Government has been happy with the closure of YouTube and their condition for unbanning it is to have power to block politically incriminating videos, Ali Moeen Nawazish

YouTube like other social media sites is a place where corruption, government incompetence and lies from politicians can be highlighted without fear of repercussion. Obviously as they say a picture is worth a thousand words, so a video which has 24 pictures in every second must be worth millions! The political motivations to keep YouTube blocked are not a secret. I sincerely hope that you look beyond this, and don’t choose the protection of some over the benefit of thousands.

I am also sometimes astonished and surprised that there is no publicly shared criteria due to which websites are banned. There is also no official list published. As a citizen of this country it is my right to know why my Government, who I elected by the way, refuses to let me exercise my basic rights. What is even more astonishing and surprising is that some websites like BuzzFeed are blocked without any reason.

Speaking of laws, ethics and morality because apparently that is the reason why YouTube was blocked, why don’t all our government offices use original legally purchased software. There is no question of moral and ethics there, when it should be. Piracy is theft, yet all big piracy portals are openly accessible in Pakistan. All torrent(a way of illegal file sharing) websites are also accessible!

Blasphemy, is also not a valid excuse. Because if YouTube is blocked only due to blasphemous content then it is quite hypocritical. There is a lot of blasphemous content on Facebook, Twitter, and hundreds of other websites which are still completely accessible in Pakistan! I can provide a list if you so ask. I emphasized on the word “service” because YouTube is a service and tool for communication. As a newspaper, book, magazine, or even our ability to talk is. The internet has no editorial control, and that is why it’s free. We can’t just ban everything.

Also YouTube and many sites carry a lot of pro-Islamic material as well. There are many lectures and material available on YouTube for free. It is a tool to reach out. We need to use that tool. By blocking YouTube our ability to spread our message has significantly been hampered! We need to make it accessible, because it has a wealth of knowledge that we are now devoiding our people from, in particular our younger generation and the youth.

Thank you for your time, and I hope you will take these recommendations into considerations.

The writer is Youth Ambassador of Geo and Jang Group. He can be contacted via Facebook and Twitter

The post To Anusha Rehman, the Minister of State IT and Telecommunications appeared first on .