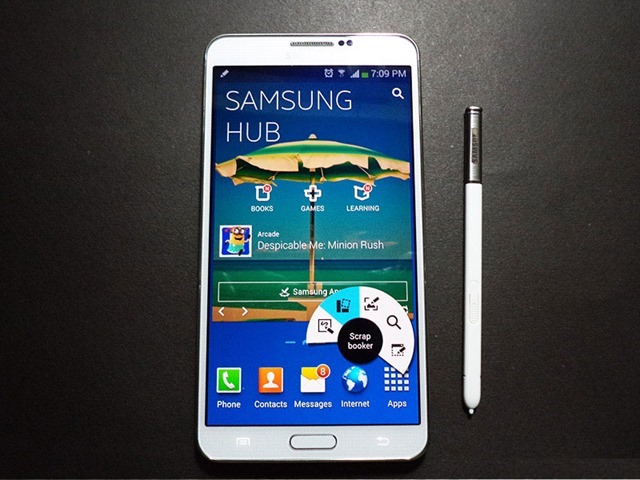 Samsung recently launched the Galaxy Note 3 along with Galaxy Gear Smartwatch in Pakistan. It’s a big phone with a big price tag, which narrows the target market but still it is one of the best Android smartphones available in the market.

We have had the chance to get our hands on this monster for reviewing purposes.

Let’s get straight to the unboxing video:

Just like its predecessors Note 3 is a very large phone (read phablet). Every year Samsung increase 0.2 inches in the screen size; starting with the original Note was 5.3 inches, Note II was 5.5 inches and now the Note 3 has a 5.7 inches screen. It is around 5.95 inches tall, 3.1 inches wide and weighs about 168 grams.

Surprisingly the phone is almost the same size and even thinner (0.33 inches) & lighter than Note 2, thanks to the narrower bezels.

Once again Samsung has decided to stick to the plastic, but this time it’s different and pleasantly a lot little better. Note 3 has less rounded edges, much like the original Note. On the front it has a very nice pattern and the backplate now has a faux leather appearance. 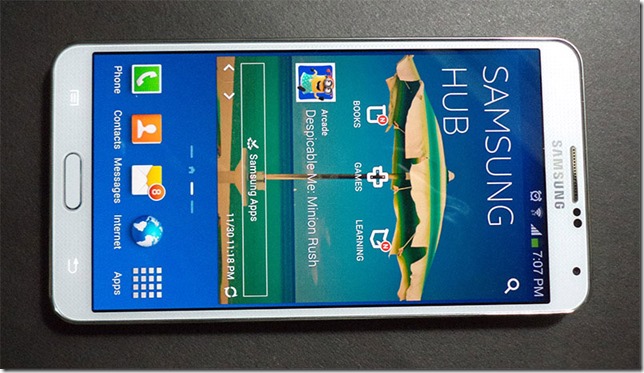 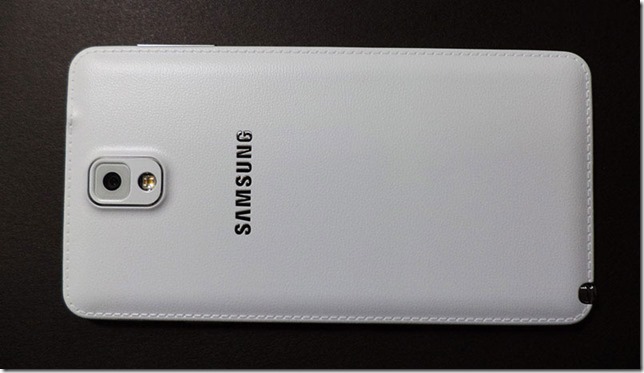 Sadly the frame is still made of cheap plastic, though it has a book pages like texture which also helps for a stronger grip. 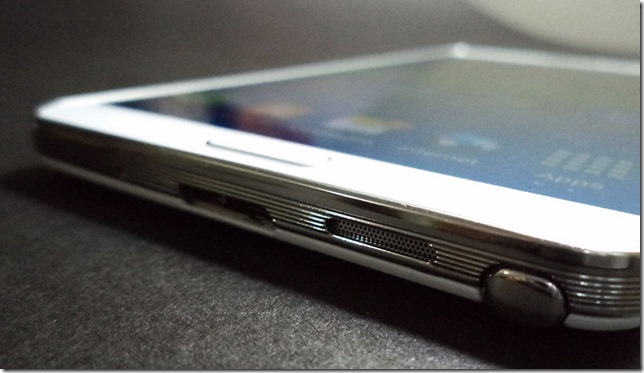 The placement of sensors, keys and cameras is as usual. Above the screen we have multicolor notifications LED, ear speaker, light sensors and a 2 megapixel camera. Below the screen there is well crafted physical home button along with two LED touch keys. 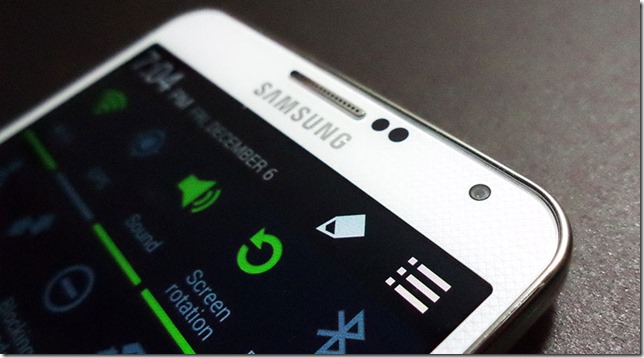 Power/Lock key is placed on the top right corner of the frame and the volume rocker is on the opposite side. On the bottom there is the mic, microUSB 3.0 port, speaker grille, and the legacy S pen slot. On the top there is IR blaster and 3.5mm headphones jack.

The back side features 13 megapixel primary camera along with single LED flash light along with the shiny Samsung logo embossed into the backplate. Though the backplate is made of polycarbonate plastic but Samsung has managed to give it a leather like feel, while the fake stitches manage to fool the first time user.

Under the hood there are slots for microSIM, microSD card and a 3200mAh battery. Unlike the Galaxy Note 2 the NFC antenna is now embedded into the battery. 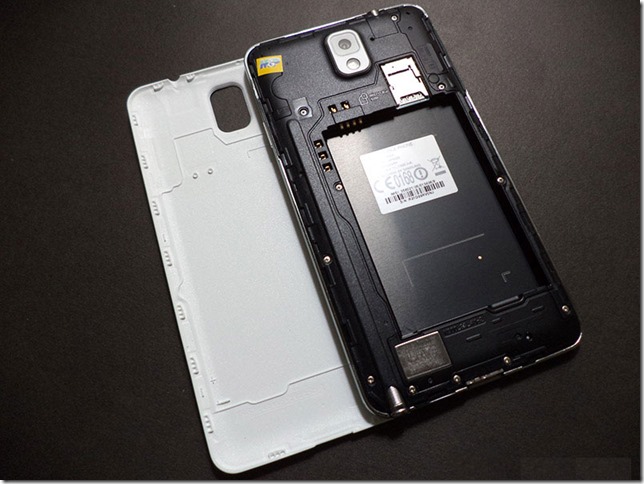 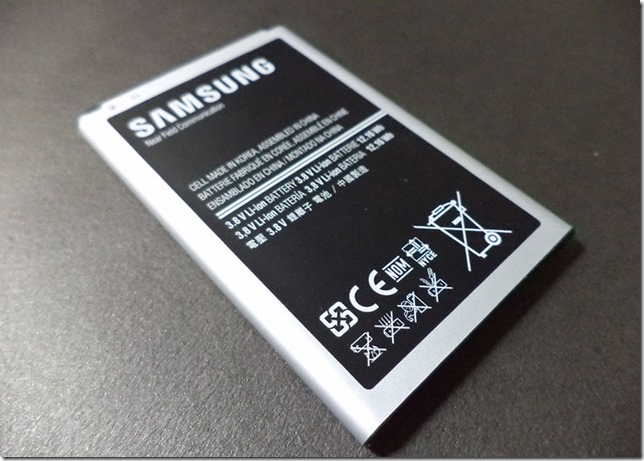 Despite the fact that it is a big (reader too big) phone and still all made of plastic, Galaxy Note 3 is undoubtedly the best looking Galaxy device from Samsung. It takes some time to get used to and if you have big hands that’s a blessing otherwise have your both hands at the ready all the time.

Galaxy Note 3 can fit easily in your jeans or even in the dress pant pocket but it looks terrible. A Jacket pocket would be fine though and same goes with ladies handbags.

Galaxy Note 3 has simply the best processing power if compared to all other android devices available in the market, thanks to combination of quad-core processors and 3GB of RAM; which makes it lightning fast.

Note 3 has a gorgeous 5.7 inches screen with a resolution of 1,920 x 1,080 (386 ppi). The colors are vibrant that enables the sun light readability pretty amazing, not to mention that the screen is ultra-responsive and you can use it wearing gloves too.

Galaxy Note 3 comes with a primary 13-megapixel shooter and secondary 2-megapixel camera for video calling. We will discuss about it in detail shortly.

The two major changes in the Galaxy Note 3 are microUSB 3.0 port and 360° S pen stylus. The new USB port allows faster charging and data transfer and the new stylus design makes it easy to push the pen back in its position as you don’t have to check the correct side.

Note 3 comes with Android Jelly Bean 4.3 out of the box, a KitKat upgrade for the device is also planned. On top of Android it features the familiar TouchWiz UI. Which is again very bulky but due to the high processing power you won’t feel any lag. 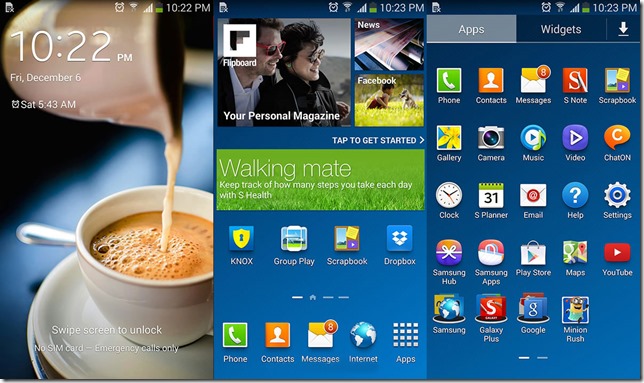 Samsung has refined the software from the previous iteration and added some new and unique features like animated lock screen wallpaper, short animations while opening S apps and Air Command.

The usual S apps like S Voice, S Planner, S Health and Samsung Hub are there, with a new addition of Flipboard like application called My Magazine. Galaxy Note 3 also features all the fancy eye-tracking features as well as the Multi Window functionality, where you can open and look at two apps at the same time. 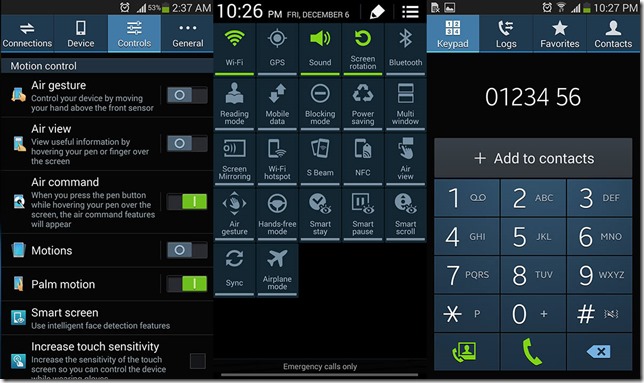 Have a look at some of the benchmarks, but also keep in mind that Samsung was caught manipulating the benchmarking scores. So these number might not be correct but still the real performance of this device is extraordinary, thanks to the premium hardware. 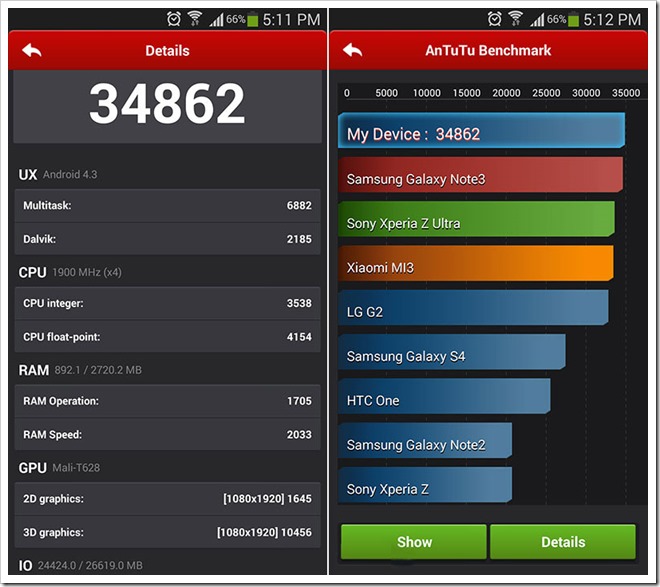 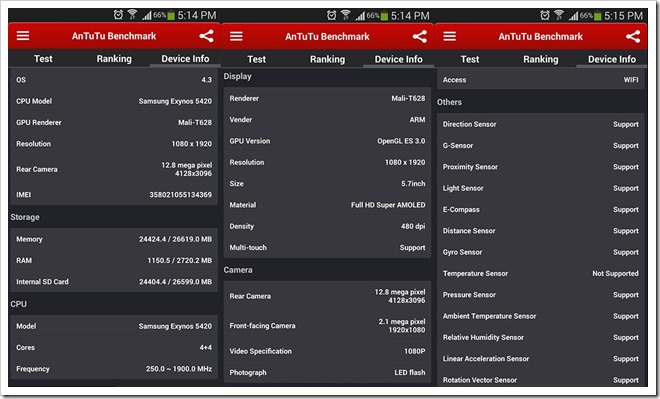 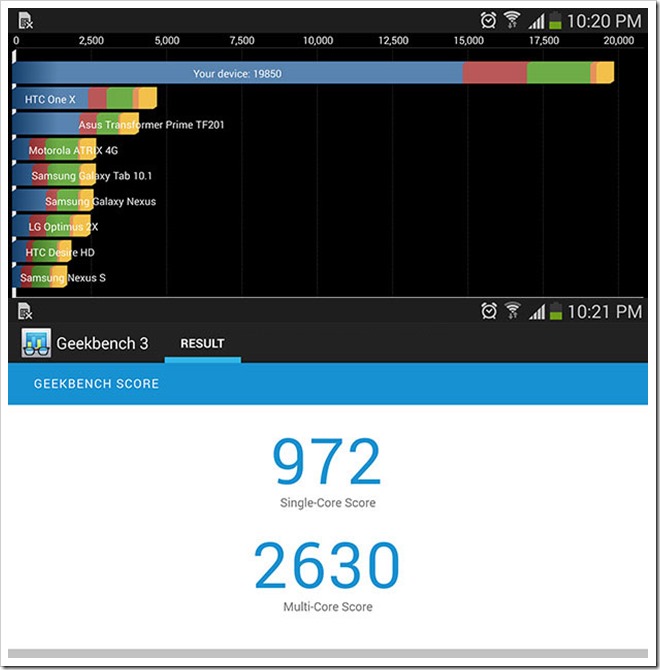 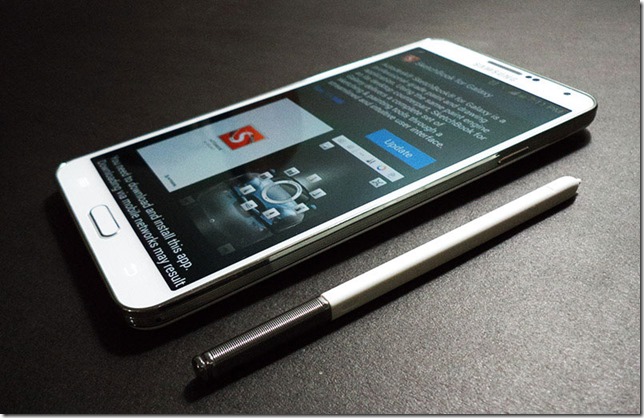 Samsung has improved the S pen in terms of design and usage from the previous iteration. Though the placement of button and size of pen is almost the same, but now it’s easier to pull and push the pen back in its slot, thanks to the 360° top. The S Pen stylus is powered by Wacom’s digitizer technology which gives a very accurate writing experience.

The newest addition in S Pen software is the Air Command pop up menu, as soon as you remove the stylus a circular menu pops up with five quick access shortcuts to Action Memo, Scrap Booker, Screen Write, S Finder and Pen Window. 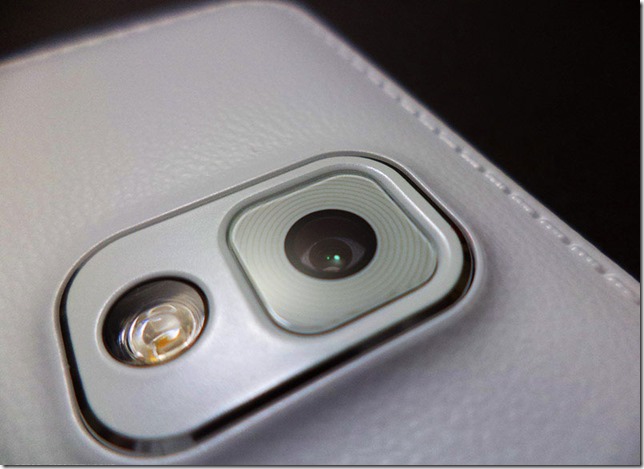 As usual Galaxy Note 3 is equipped with two cameras, the primary 13-megapixel BSI shooter along with a single LED flash light and 2-megapixel front facing camera.

The camera application is based on the Samsung Galaxy Camera interface, you can record video and shot still images from a single viewfinder and it may take a while to get used to this interface.

The one noteworthy change is the Mode button, right below the shutter key; pressing it brings a carousel with different shooting modes. To make it easier to understand every mode has a descriptive image and text.

Galaxy Note 3 also features Surround shot (Photo Sphere) which creates spherical panorama just like Google Street view, other than these fancy modes there are many color/picture effects available and you can download more. You can also apply these effects/filters after taking a photo.

In the daylight and good lighting conditions, images come out sharp with accurate color balance and depth, but the camera seems to be struggling in low light.

The overall quality of videos played on the device or computer is very good but keep in mind that if you are recording videos then you will soon need a bigger memory card.

Check below sample pictures taken by a Note 3 Camera:

Please click on images to view the original size and quality. 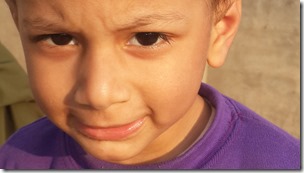 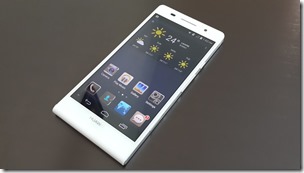 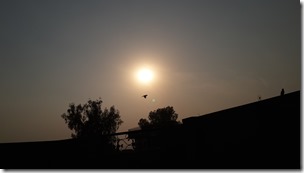 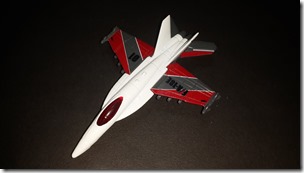 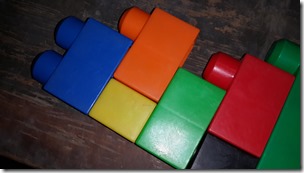 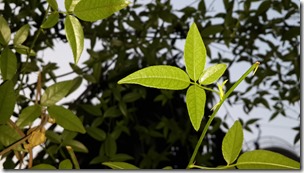 Note 3 is packed with a big 3200mAh battery, which should provide a decent backup. Unfortunately the unit we received had a faulty battery or was it due to some software bug, causing the battery to drain so fast.

In our tests the battery didn’t last for more than 4 hours while just using WiFi for browsing or playing a game with very low brightness and everything else cleared out of memory.

With a normal usage it barely gave 24 hours backup, which is quite low as compared to the Note 2. After reading many good reviews about its battery we can only assume that our review unit had some issues. 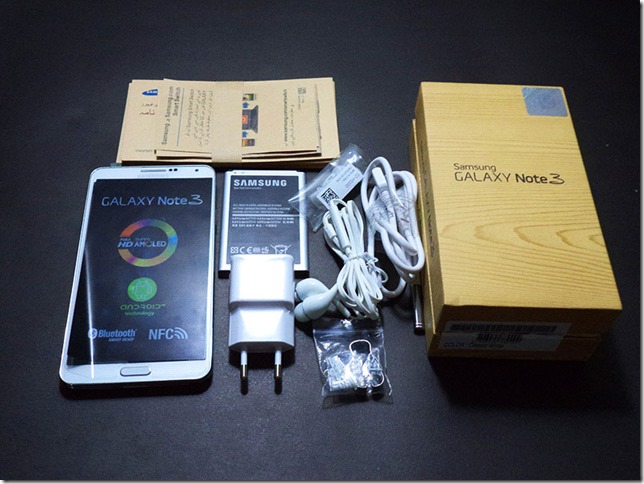 Samsung has once again proved that no one can beat them in the phablets segment. Galaxy Note 3 is no doubt the best android device available in the market for now.

Phablets or smartphones with big displays were once considered weird, but now these devices are getting more attraction than medium size smartphones. Note 3 is packed with the finest hardware and this time Samsung tried hard to give it a premium feel; that makes it the best Galaxy smartphone yet, which comes with an elegant S Pen.

This big smartphone was introduced with big price tag of Rs. 83,000 but surprisingly the company soon reduced its price to Rs. 70,000 and do remember that’s just for the smartphone, Galaxy Gear smartwatch is sold separately at a price of Rs. 29,000.

Galaxy Note 3 is available in 3 colors; Black, white and pink with one year warranty all over Pakistan.

It merits mentioning here that this phone is also available in the grey market, which is of course without warranty at a price of Rs. 62,000.