Currency depreciation, however, resulted into 4 percent Y-o-Y fall in revenues in Norwegian Kroner that stood at NOK 4065 million — for three quarters combined — as compared to NOK 4,232 million during same period last year.

The Telenor Group reported its third quarter financial results during the weekend where it said that Telenor Pakistan, during the reported quarter, showed an operating profit of NOK 282 million, versus an operating loss of NOK 95 million in Q3 2012.

EBITDA in local currency increased by 12%.

Capital expenditure decreased as the network modernisation was finalised during the quarter, also resulting in reduced accelerated depreciation and improved operating profit

Company said that its ARPU in local currency decreased by 10%, mainly because of fierce on-net competition putting pressure on national interconnect revenues.

ARPU for postpaid users was reported at PKR 686, compared to PKR 190 ARPU for prepaid users.

ARPUs were also impacted by the fact that revenues from incoming international traffic through International Clearing House (ICH) are now accounted under non-mobile revenues and are not added into ARPU levels.

Telenor said that its subscribers increased by 160,000 during the quarter including a downward adjustment of 542,000 subscriptions following data cleaning exercise.

Telenor’s Average traffic minutes per user per month stood at 225. 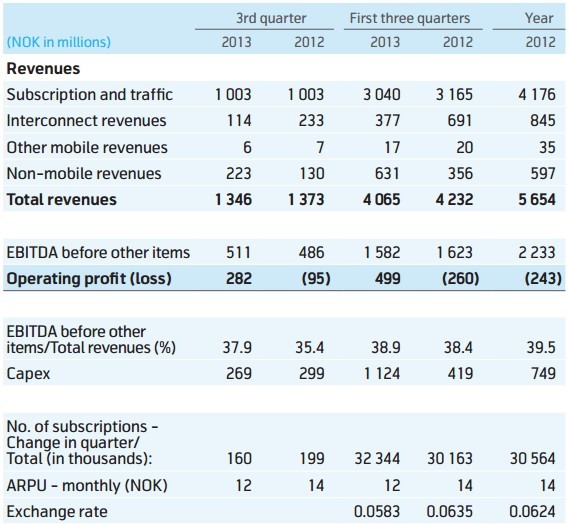