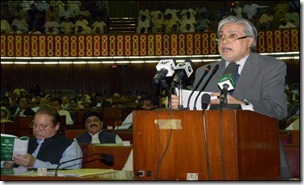 Telecom and Information Technology industry hasn’t been touched – at any level – in the finance bill for year 2013-14 that was presented yesterday. All the taxes are likely to remain unchanged, leaving the telecom sector still one of the most taxed domain in the country.

While there was no hope of any decrement in taxes, telecom industry has shown its reservations over the 19.5 percent FED and 10 percent WHT on telecom services. At the same time, some industry officials are contented with the budget as it didn’t hike any tax rate on telecom services and the equipment.

It merits mentioning here that telecom consumers pay around 7 percent for telecom services under the head of service charges, in addition to 29.5 percent taxes.

Broadband internet services, which were rumoured to be taxed this time, will remain un-taxed as well.

It maybe recalled that government of Pakistan recently imposed taxes on mobile and smartphones.

On the other hands, government is expecting over USD 1.8 billion recovery from telecom sector to meet its deficits. USD 1 billion from the auction of 3G licenses, while another USD 800 million it expects to receive from Etisalat, which the UAE based firm is holding for over five years now.

The post Telecom and IT Industry Goes Untouched in Budget 2013-14 appeared first on .