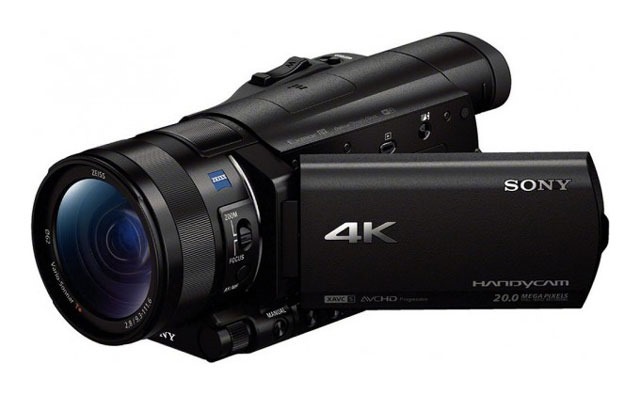 Getting a camera/camcorder to shoot 4K videos is an expensive business but Sony is now trying to get things under control with its new FDR-AX100 camcorder. Priced at $1,999, the AX100 is a comparatively cheaper solution of getting your hands on a next-gen shooter.

It comes with a 20 megapixel 1″ Exmor R CMOS sensor which doesn’t sound too big but its maker is promising quality results nonetheless. Its 29mm wide-angle Carl Zeiss Vario-Sonnar T lens supports up to 12X optical zoom.

And thanks to a new My Voice Cancelling feature, the audio in the videos shot will be clearer and much-more directed towards the subject being shot. Optical SteadyShot Image Stabilization too makes sure that the videos being shot are smoother.

The LCD touchscreen display measures 3.5 inches in size, standing alongside an OLED viewfinder. The AX100 comes with NFC, built-in USB and Wi-Fi for faster file transfers, along with support for Class 10 SDXC memory cards.

Available in March for $2,000, you’ll be mad to buy it if you aren’t truly dedicated towards shooting videos, either for fun or professionally but in either way, this is the cheap way forward.

If you don’t want 4K video shooting, you can look towards Sony’s own HDR-CX900 which does every thing the AX100 does, just in Full HD and not 4K for $500 less. Professionals can also look towards this handycam’s larger brother, the AX1 which is much larger and high-tech, not-to-mention much more expensive at $4,499.

The post Sony Announces the 4K Shooting AX100 Camcorder for $2,000 appeared first on .