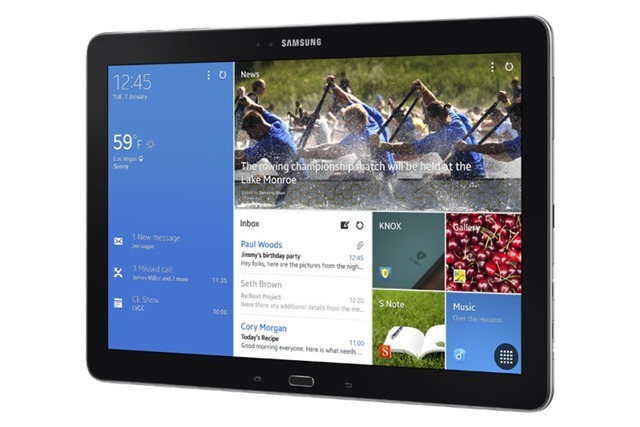 The tablets include Samsung’s new homescreen interface called Magazine UI, which includes tiles of apps and your favourite content.

As expected, the highlight of the bunch is the NotePro 12.2, which is the largest member of the entire Note line-up. As you would expect, it has an S-Pen slot at the back with the same leathery-finish on the back.

The display comes with a WQXGA resolution of 2560 x 1600 pixels. Underneath, you’ll get either a SnapDragon 800 or Samsung’s Exynos 5 Octa processor.

Alongside it will be Adreno 330, 3 GB RAM and 32 or 64 GB expandable storage. Towards the back is an 8 megapixel camera with Full HD video capture at either 60fps or 30fps, depending on the version.

Connectivity options include IR Blaster, microUSB 3.0, Wi-Fi 802.11ac and Bluetooth 4.0, with a 4G version being in the pipeline as well. The OS running is Android 4.4 KitKat.

The remaining three tablets, the Galaxy TabPROs 12.2, 10.1 and 8.4 are all almost entirely the same, with the major difference amongst them being the varying screen sizes.

The largest of the lot, the Galaxy TabPRO 12.2 features specifications completely similar to the NotePRO 12.2, with a 12.2″ WQXGA resolution, SnapDragon 800/Exynos Octa 5 processor, 3 GB RAM, 32/64 GB expandable storage and an 8 megapixel rear-camera. There’s no S-Pen, of course.

The TabPRO 10.1 features a substantially smaller display, again with WQXGA, but this time with 2 GB RAM, 16/32 GB storage and 8220 mAh battery.

The TabPRO 8.4 also retains the maddeningly high resolution but there’s only one choice as for the processor here, the SnapDragon 800 one. The amount of battery storage is also smaller, at 4800 mAh.

The tablets  will be released in the first quarter of 2014. Pricing isn’t announced for either of them yet.