Freelancers around the world are unable to access their money from their prepaid Payoneer card thanks to a recent Wirecard scandal in the UK.

Wirecard is a subsidiary of the German company Wirecard AG that filed for insolvency on Thursday. All Payoneer Prepaid Mastercard cards are affected considering they are issued by Wirecard UK.

The United Kingdom’s Financial Conduct Authority (FCA) has ordered Wirecard Card Solutions Limited, a UK company to stop all its regulation financial activities, in addition to some other restrictions.

Payoneer issued a statement to all their prepaid card users saying: 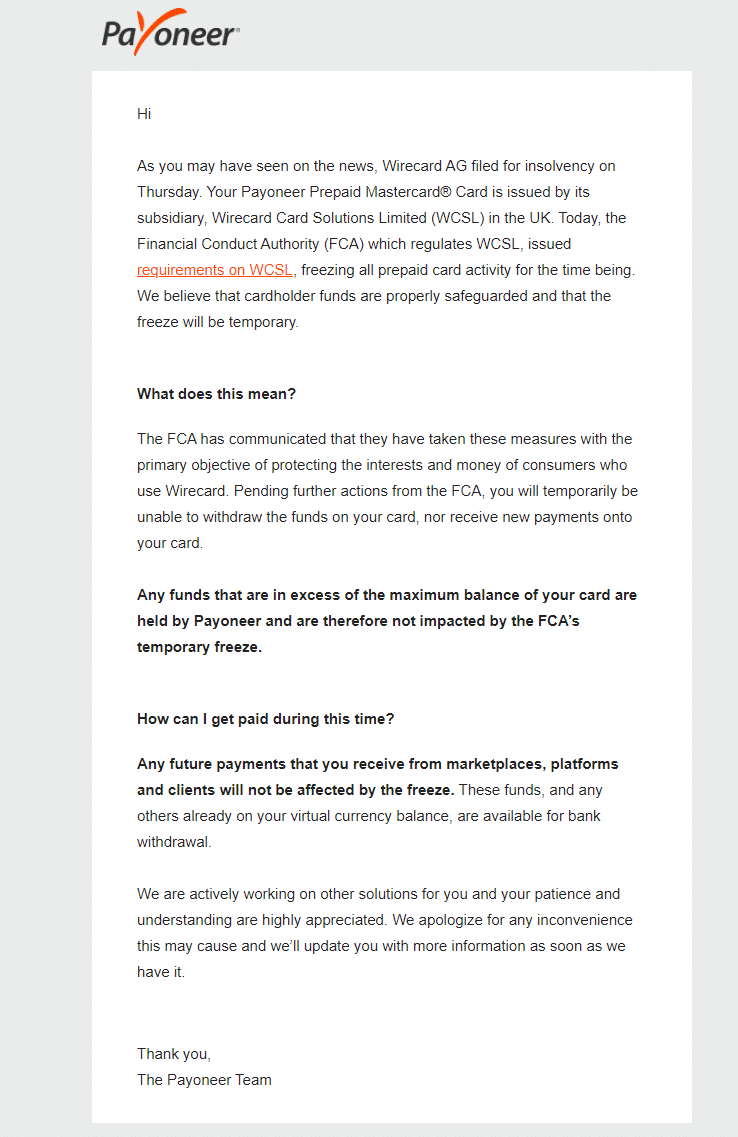 Wirecard AG filed for insolvency on Thursday 25th June 2020 due to an ongoing scandal regarding missing $2 billion, with the ex CEO Markus Braun arrested under criminal charges. The shockwaves from Wirecard AG’s crash were felt all over the world.

Payoneer made it clear that any future payments that the customer will receive from marketplaces, platforms, and clients will not be affected. They also mentioned that the freeze is temporary and will be resolved soon.

These funds, and any others already on your virtual currency balance, are available for bank withdrawal. We are actively working on other solutions for you and your patience and understanding are highly appreciated. We apologize for any inconvenience this may cause and we’ll update you with more information as soon as we have it.

The State Bank of Pakistan’s spokesperson was reluctant to offer any comment. He told ProPakistani that they can’t regulate Payoneer.

“We will examine the impact of this issue on Pakistan,” he added.

ProPakistani has contacted Payoneer directly for a statement but we have yet to receive a response from them.

This is a developing story, more info will be added as it emerges.

The post Payoneer Freezes All Prepaid Cards Around The World Due to $2 Billion Scandal appeared first on .