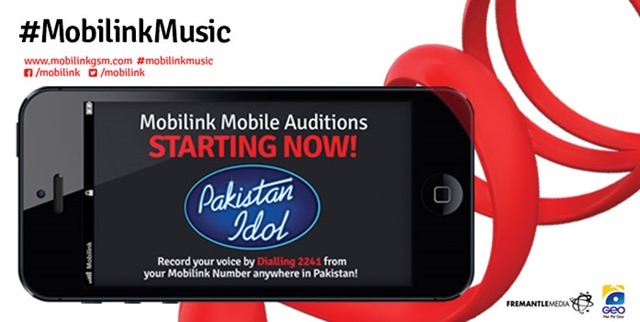 The Mobilink mobile auditions mark the first time in the history of the global reality show that participants have been able to send in their nominations using call-ins.

As the official cellular partner of Pakistan Idol, Mobilink took on the responsibility of empowering 37 million subscribers on its network by providing them access to Pakistan Idol through their mobile phones. The resulting call-in nominations were received from over 850 cities, towns and villages from across Pakistan.

Farid Ahmad, Vice President Marketing, Mobilink said, “Our support for Pakistan Idol is part of our belief in the inherent talent of the people of Pakistan. As Pakistan’s telecom industry leader, Mobilink understands its responsibility to provide an equal opportunity across the length and breadth of the country to participate in the world’s largest music reality show. Mobilink takes great pride in having increased the outreach of ‘Pakistan Idol’ to over 850 locations across Pakistan.”

Pakistan Idol will follow a similar pattern as the international ‘Idol’ series. A total of 100 participants are to be finalized in the first round, based on in-person and mobile auditions. 40 will be further short-listed to reach the ‘Theater Round’ where they will compete in group and individual performances. The ‘Piano’ round will be the final stage of the competition, with 13 contestants performing over several weeks for the coveted title of ‘Pakistan Idol’.