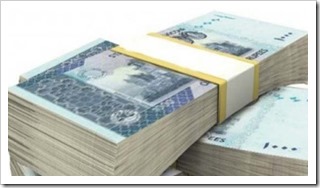 This flat charge of 8 percent against any money that mobile customers load into their mobile accounts go straight to the cellular companies’ pockets.

Interestingly, these service charges are not charged against any service, airtime or value addition, instead these charges are deducted as a royalty, line rent, tax, extortion or call it whatever you like.

Cellular companies kept increasing these charges, at a different rate, and are now finally charging 8 percent of all amounts.

Now if you are a taxpayer (which most of us aren’t) then you can claim a refund – if applicable – against the WHT that you pay for telecom services. For example, if your monthly usage for mobile service is Rs. 1,000 or Rs. 12,000 per year then you can get a refund of Rs. 1,800 or 15 percent of the total spending.

However, most of Pakistani don’t pay tax or they aren’t registered as tax payers and hence WHT is deducted forever without any chances for a refund.

Technically speaking, 19.5 percent FED is the only true tax that goes to government and is non-refundable. And so are the service charges, which are 8 percent of total reloads.

In order words, almost Rs. 42.5 are deducted against a card load of Rs. 100. But technically, Rs. 15 can be refunded, while Rs. 8 go to telecom operators against no services.

Telecom operators argue that increased inflation, devaluating Pakistani currency, energy crisis, low ARPUs and low tariffs are the reasons behind these service charges. However, they fail to explain that why such service charges are unique to Pakistani market only when all these factors are being faced by several other regional markets (including Africa).

Telecom companies also fail to explain that why did they give up to competition and price war this much that their ARPUs have gone rock bottom.

Just if you don’t remember, very same telecom companies — that deduct 8 percent service charges — complain about high taxes and argue that higher tax deductions are hampering their growth, burdening the customers, lowering the revenues and so on.

Telecom companies should not pretend and must not shout against tax hike, as this is the result of compromise they have made with the government against a free-hand from regulator and government to impose service charges as they like.

The post Only in Pakistan: Telcos Deduct 8% or Equal to Half the Amount of Taxes As Service Charges appeared first on .