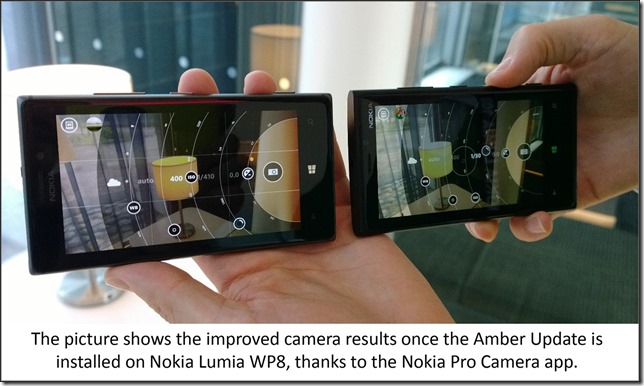 The new Nokia Lumia Amber software update for Windows Phone 8 is now available in Pakistan for the Nokia Lumia 920 and 820, while users of the Nokia Lumia 720, 620 and 520 will get the update by the end of September this year.

The update delivers a wide range of new and improved features and apps, like Nokia Glance Screen with the standby clock and even better imaging experience for Nokia Lumia owners.

Speaking about the new update, Arif Shafique, country general manager, Nokia Pakistan & Afgahnistan said, “The WP8 momentum is building and Nokia is charging ahead with the Lumia series. The availability of the Nokia Lumia ‘Amber’ update in Pakistani market reflects our commitment to build a winning ecosystem that will enrich people’s mobile experience and help them connect with each other through newer avenues. The Amber update will further invigorate brand Nokia amongst this generation of smartphone users, and provide them with a richer experience.”

Nokia Lumia Amber builds upon the latest update for Windows Phone 8 from Microsoft. In itself, this provides a number of significant additions to the already powerful imaging technology:

Firstly and foremostly, the brilliant Nokia Pro Camera app which features an all new interface which is similar to the one found on high-end DSLRs, given the amount of control it gives to the user. This feature will come only on the Lumia devices with PureView technology.

The Amber update brings the famous Glance screen on Lumia smartphones which is a bit similar to the clock and status notifier the classic Nokias had. Glance also gives nifty information right on the lockscreen. It will only be available on phones with AMOLED screens which means the Lumia 625 and 520 are left out.

It also brings the FM Radio (not on 620), a couple of accelerometer-related features, bluetooth 4.0, storage check tool, video-editor and faster updates to HERE. New features are also made on the camera front, as in the case of the Lumia 920.

This is quite encouraging, especially since this time, it’s Nokia itself who is churning updates out itself and not Microsoft, which should’ve been the one doing this thing. It’s not everyday that we see that.

The post Nokia Lumia Amber Update Ready to Roll Out in Pakistan appeared first on .