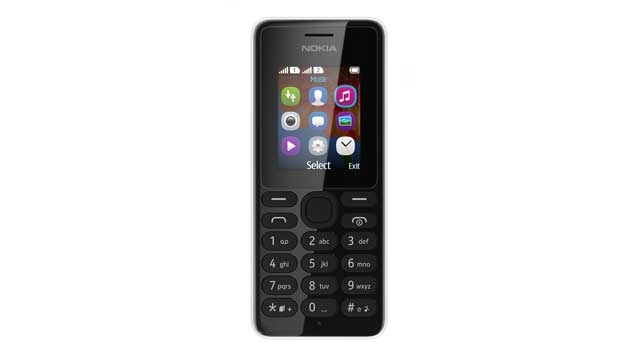 Nokia may have been brought by Microsoft but that hasn’t stopped it from announcing new featurephones. The latest phone in the chain is the Nokia 108 which will also come with a dual-sim version of the phone.

Specs-wise the phone is not much different from most other devices of its class. Upfront is the 1.8 inch LCD display with 160 x 128 resolution. Beneath it are the 5-point navigation keys and the 12 button keypad. An addition is the VGA camera on the back which the Nokia says is enough for first-time camera phone buyers.

Storage is expandable via a microSD card slot. A 950 mAh battery with over a month worth standby time and about 14 hours talk-time. And as is the case with phones like these, the 108 is quite compact too, weighing in at just 70 grams.

An optional dual-sim version of the phone will be there at launch. As for the software, the phone (most-probably) comes with Symbian S40, and has music player and FM Radio applications.

The 108 and the dual-sim version will cost around $29 at launch which is just about as cheap as you can expect from Nokia. They’ll arrive in Q4 of this year. While they won’t be replacing your smartphone, it’s sometimes really helpful to have a secondary phone with extra-long standby time. Or to play Snake.

The post Nokia Introduces Another Low-End, Dual SIM Phone, the 108 appeared first on .