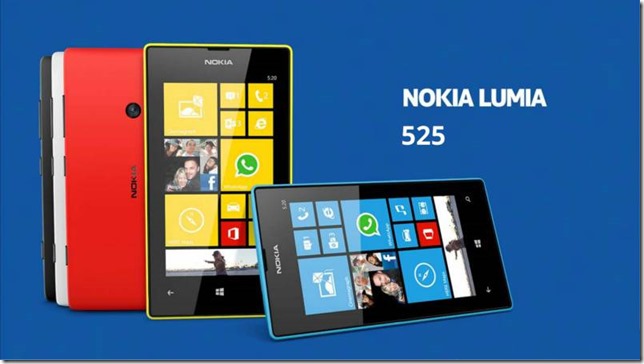 Nokia has finally announced the successor to the most popular and of the most inexpensive Windows Phone in the world, the Lumia 520 in the Lumia 525.

The handset might just be a temporary alternative to the aging Lumia 520 and as a result, is little different.

On the front you get a 4 inch display with WVGA resolution. There’s no camera above the display for the second attempt either.

On the hardware side, the biggest change that is being observed is the increase in RAM, from 512 MB to 1 GB, meaning more apps can be run now.

Apart from that, you get the same 1Ghz dual-core SnapDragon S4 processor, 8 GB storage expandable via microSD, along with a 5 megapixel camera on the back (again without LED Flash) with 720p video recording.

The software which comes pre-installed on the Lumia 525 is Windows Phone 8 Black, which of course comes loaded with quite a lot of Nokia’s customization and apps.

The phone will be available in 4 colors. Pricing is not confirmed but it will cost around $180 upon release, not much more than the 520 itself.

The phone will get released in the coming few weeks

The post Nokia Announces the Successor to the Lumia 520 in the Lumia 525 appeared first on .