It appears that Pakistan hackers are on fire, and they have decided not to leave any bank. This time it is Muslim Commercial Bank or MCB.

With apparent slogan of defacing Banking websites, hackers claim to be with the aim of securing Pakistani cyber space. They maintain that banks were previously warned about all the security flaws but since banks’ staff don’t seem to be serious with the warnings and hence hackers have no point but to deface their websites.

Tonight, an inner page of Muslim Commercial Bank was defaced by two hackers who want to be called as Dr.Freak and Xploiter. We suspect – due to the names used – that this is the same group who had recently carried out defacements of HBL and ABL.

However, the tone and feel of the message left on MCB’s defaced page doesn’t resemble with previous messages.

Did not u GOt the lesson after Pknic soneri bank hbl and allied bank. huh secure your sh*ts Secure Pakistan cyber space zindabad xploiter and Dr.Freak.

Here is the link of defaced page: http://mcb.com.pk/psc/cards/iparty/detail.asp?mid=16&type=1&cid=1

Webpage is still defaced, till we last checked before publishing this story. Here’s the screenshot: 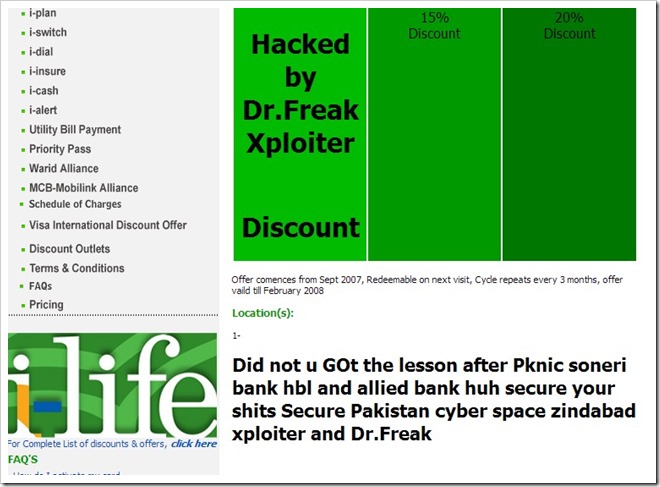 The post MCB Targeted by Hackers, Becomes Third Defaced Bank in One Week! appeared first on .