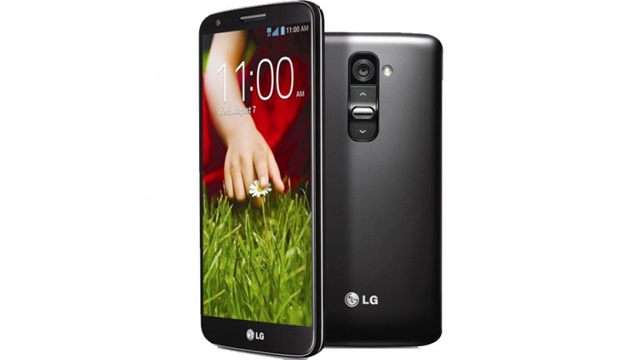 After teasing its next big phone for quite some time, LG has finally taken the covers off its latest and greatest smartphone. The new flagship, simply called the G2 (nothing Optimus here) has a 5.2 inch display and SnapDragon 800 processor.

The first thing you’ll notice with the G2 is that it has got almost no bezels. Also, the plastic-made phone has no hardware key at the front. The back boasts a 13 megapixel camera, and below it are the only hardware keys of the whole package. The volume control and lock keys are placed at the back because LG thinks that’s the right place for big phones like side, as compared to those on the sides, and also improves the users’ grip.

The display of the LG G2 is a 5.2 inch IPS touchscreen, with Full HD resolution of 1920 x 1200 pixels and brightness rating of 450 nits. It’s Corning Gorilla Glass 3 protected. The display also features a technology called GRAM which reduces power consumption by 26%.

LG G2 is the first widely available smartphone with SnapDragon 800 processor. The processor is clocked at 2.26Ghz and is accompanied by Adreno 330. The amount of RAM available is 2 GB, while the amount of storage you’ll get is 16 or 32 GB which is non-expandable.

The phone runs on customized Android 4.2.2 Jelly Bean and comes with several software tricks of its own.

AnswerMe allows you to take phone calls by just taking the phone to your screen. In Guest Mode, you make a special, different-than-usual gesture to unlock the phone, which then displays the customized OS for other people to use. It’s a great feature for privacy in-case you have something on your phone that you want to hide.

KnockON lets you double-tap the display as an alternative to pressing the power lock key. Slide Aside lets you close running apps by simply sliding three fingers across the screen. QuickRemote turns your phone into a universal remote.

The camera on the LG G2 is of 13 megapixels with 1080p Full HD resolution at 60 frames per second, twice of almost all flagships. 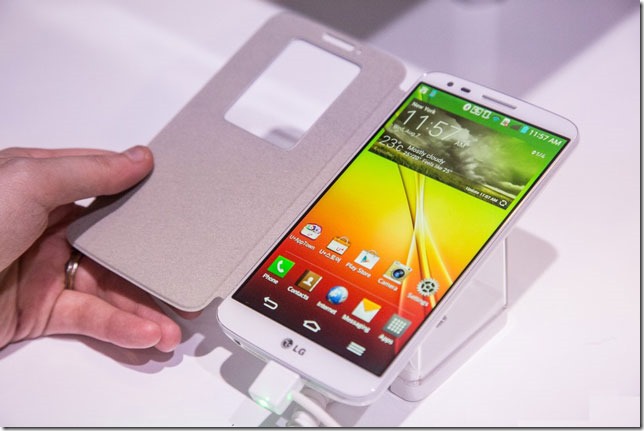 Here are the specs of the smartphone:

The LG G2 will be available worldwide in the coming two months. Pricing details are unknown though.

The post LG’s Next Flagship, the G2 Goes Official appeared first on .