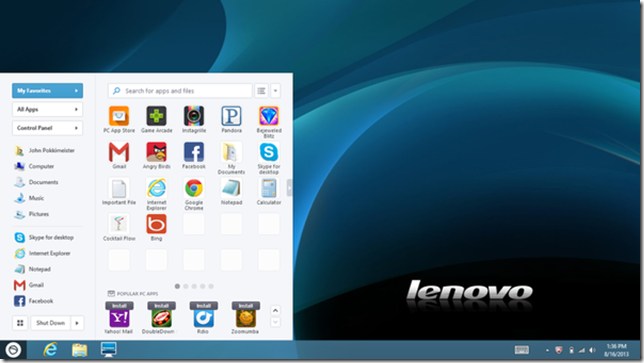 So far, the lack of a proper Start Menu is one of Windows 8’s biggest drawback. Microsoft has planned to bring it back in version 8.1 later this year but it won’t be doing its job the conventional way, directing you instead onto the Start Screen.

Well, atleast Lenovo has found the solution and it’s no rocket science.

You see, the list of third-party Start Menus is huge by all means and the world’s largest PC maker has teamed up with one of them, SweetLabs, to bring the start menu button themselves. The company’s “Pokki” offering was already available through its website since 2011 and boasts 1 million monthly active users & 3 million overall downloads.

“Our collaboration with SweetLabs strikes the perfect balance between providing our customers great apps, and growing Lenovo’s business around app distribution,” says Lenovo executive Peter Gaucher, “The Pokki software suite complements the Windows experience, and we’re excited to work with SweetLabs to open up new distribution opportunities for app developers across our devices worldwide”.

The Pokki also comes with its own Software Library which competes with Microsoft’s counterpart. Being one of the most popular Start Menu alternatives around, the software can really boost efficiency for users who aren’t keen on learning new stuff of techology.

The post Lenovo to Bring the Start Menu in its PCs Itself appeared first on .