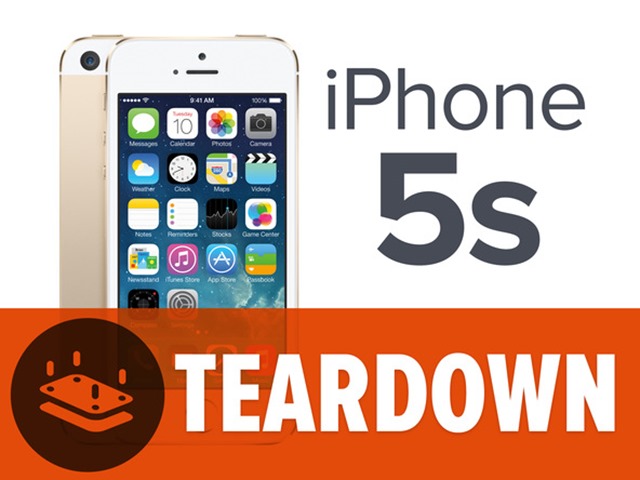 Few hours after the launch of the most appealed Apple iPhone, the iPhone 5S; Geeks and Technology Enthusiasts from all around the world, had gone crazy exploring the core, as well as the exterior of the most sold mobile phone ever.

Just if you don’t know, Apple sold 9 million iPhones during its first weekend, topping the 5 million record that was set by Apple itself last year.

Chipworks – A Company dedicated to exploring the inside of the world’s largest technology organization, and taking their products apart – had partnered with iFixit, and has wasted no time in reverse-engineering the 5S.

Just like every other Apple’s product, the iPhone 5S is a wonder of engineering, assembling the most advanced hardware technology of various vendors, including the new A7 system on a chip, M7 coprocessor and the most sought-after Touch ID fingerprint authentication hardware into one of the lightest and thinnest smartphones in the market.

Among the highlights of iFixit’s teardown along with Chipworks of the iPhone 5S is a new Sony sensor for the 5S camera, the technology behind the new fingerprint scanner, the engineering ability to squeeze in a larger battery — and curiously there’s no M7 coprocessor to be found in fact it’s really just a tiny, standard Cortex-M3 core.

While the reverse-engineering is ongoing, Chipworks has already discovered that the A7 chip is indeed manufactured by Samsung, and not by Taiwan Semiconductor Manufacturing Company (TSMC). By tearing down the 5S, Chipworks was able to determine that the chip was made using Samsung’s 28nm high-k metal gate technology. It had been rumoured that the SoC would be produced by TSMC instead of Samsung, but it would seem that isn’t the case.

As far as the Camera Sensor is concerned, Apple has progressed with a “new variant” of the Sony sensor, according to iFixit teardwon.

“The markings are consistent with the markings on the camera modules housing the Sony IMX145 we saw in the iPhone 4s and on the iPhone 5. The marks on the side of the module are different, but our industry insiders tell us this is Sony’s again. As Apple has stated the pixel pitch on this camera is 1.5 µ, this sensor should not be the IMX145, but a newer variant.”

Not only this, there are so many wonderment coming along as the tearing down is still in progress.

As usual, iFixit is diving down into the most nuanced of details, so if you’d like to get a complete look at how Apple’s latest flagship is put together, be sure to check out the teardown in its entirety.

One thing that really incites me about 5S is that Apple does such an incredible job in maximizing their battery size in their tiny phone, they meticulously design the internal components to be as compact as possible.

In case you were wondering, the iPhone 5C was also torn down this morning — and, unsurprisingly, there weren’t really any surprises. It’s just an iPhone 5 wrapped in (very hard) plastic.