After weeks of leaks, HTC has finally unveiled the Desire 20 Pro alongside the U20 5G, the company’s first 5G device. Both of them are mid-range phones that come with quad-cameras, large 5,000 mAh batteries, but there is no word on pricing or international availability yet. 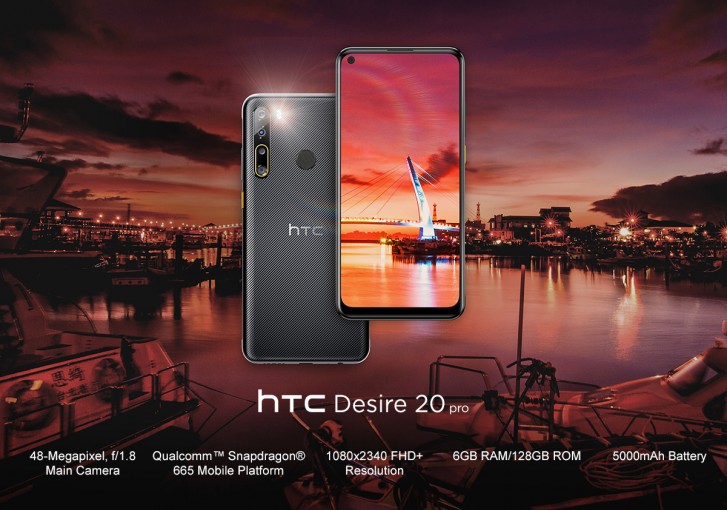 The two phones feature an identical design but have several differences in terms of specifications. The desire 20 Pro has a 6.5-inch LCD whereas the U20 5G comes with a 6.8-inch display. Both have FHD+ screen resolution and cornered punch hole cutouts for the front camera.

At the back, both devices have a quad-camera setup aligned in a vertical layout and fingerprint sensor in the center.

The Desire 20 Pro features the Snapdragon 665 SoC with a 2.0 GHz processor, 6 GB RAM, and 128 GB storage that is further expandable through a micro SD card.

Both of them boot pure Android 10 fresh out of the box.

There are no differences in terms of primary camera specs. The main camera is a 48MP wide-angle shooter that is accompanied by an 8MP ultrawide sensor, a 2MP macro camera, and a 2MP depth sensor. This camera can record 4K videos in 30FPS.

The front camera housed in the punch hole cutout is a 25MP sensor for the Desire 20 Pro but the U20 5G upgrades it to a 32MP unit. Both are capable of wide-angle photography.

There is a large 5,000 mAh battery on the phones and with fast charging support on both. However, the U20 5G will charge slightly faster than the Desire 20 Pro as it has 18W fast charging instead of 15W.

As mentioned before, there is no word on pricing or availability yet.