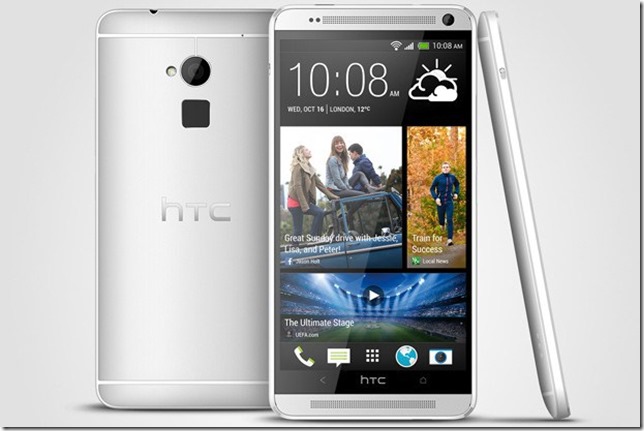 After numerous leaks over the past couple of month, HTC One Max was the phone that everyone was looking forward to.

HTC finally has unveiled its HTC One Max phone, and guess what? There is a Fingerprint Sensor too – a trend started by Motorola by introducing it in its Atrix phone, which has recently embraced by Apple in its Iphone 5S.

Beside the fingerprint sensor, the One Max is notably the same thing the techies were anticipating, including first true “phablet” features, a humongous 5.9-inch high definition screen.

The device also has 1.7GHz quad-core Snapdragon 600 processor (same as in the One), 2GB of RAM, and it runs on Android 4.3 (Jelly Bean) with Sense UI on top.

The One Max is radically a large version of the HTC One, released earlier this year, but few gripping changes have been made. Firstly, the back cover of One Max is removable, and as aforementioned, there’s a fingerprint sensor on the back of the phone that lets the user unlock the phone.

Besides unlocking, Fingerprint sensor could also be used to access various applications by assigning unique Finger for each of the App. Miserably, there doesn’t seem to be any functionality to enter your fingerprint as a password like you do in the iPhone 5s.

The removable back cover will let you insert a microSD card for up to 64GB. However, You can’t remove the 3,300mAh battery, although HTC is offering an additional Power Flip case with a built-in 1150mAh battery.

One implied deadfall on HTC’s One Max is its weight. The One Max peaks the scales at a staggering 217 grams. Yes, you get a very big screen, but Samsung has already showed that it can create a 5.7-inch phone at 168 grams, which in my view is a lot more portable.

Other than that, this phone is pretty much the same thing as HTC One, with the same UltraPixel rear camera and BoomSound front-facing speakers.

The new device will compete against the likes of Samsung Galaxy Note 3, LG G2 and the upcoming Nokia phablet.

Here are the specs again:

The company has not revealed the price of the new model yet, but has announced that it will be launched in Asia and Europe in October and the US in November.

It merits mentioning that HTC has recently posted its first loss on record last quarter, and might be planning to cover it by HTC One Max phone. However, it’s just a matter of time that we will find out.

The post HTC unveiled One Max with Fingerprint Sensor Feature appeared first on .