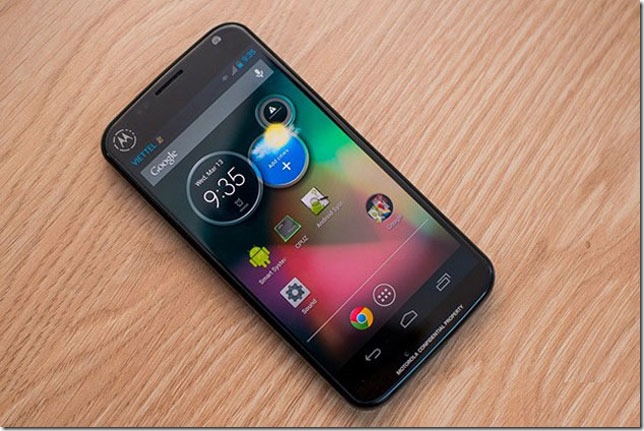 Google’s acquisition of Motorola happened quite a lot of time ago and nothing serious had been achieved from the partnership yet, but the two companies have finally done something unique with the Moto X. The much-hyped smartphone is not the most high-end smartphone you’ll see but is undoubtedly the most customizable.

To start with, the Moto X comes with a 4.7 inch AMOLED display with 720p HD resolution. The reason why the flagship-norm 1080p wasn’t chosen was because “it would just suck the battery and nobody would know the difference”. That’s right to some extent, especially since anything more than 300ppi is useless. It is protected by a new breed of Gorilla Glass dubbed “Magic Glass” and is a bit curved on its edges.

Under the hood, the phone packs a Qualcomm SnapDragon S4 Pro SoC, dual-core 1.7Ghz Krait CPU and Adreno 320 GPU. Motorola’s new power-efficient X8 chip is also there. The amount of RAM in the phone is 2 GB and the storage capacity will be 16 or 32 gigs, non-expandable.

The back boasts a 10 megapixel camera with 1080p Full HD video at 30fps, LED Flash and HDR. A 2 megapixel Full HD camera is at the front too. Talking of fronts and backs, the phone is really customizable.

Firstly, the phone is made of high-quality plastic. The back is curved which makes the Moto X fairly usable with one hand. It’s 10.4mm at its thickest point and 5.4mm on the edges. It weighs 130g.

The phone’s front panel is either black or white but the back comes in a mind-blowing range of 18 colors. Three special versions made of wood will be available later. The further customizations are done via the Moto Maker site. You can also customize the accent colors and the color of the charger & NFC speaker there. Overall, 2000 customizations can be made with Moto Maker.

But wait, the software is also a beneficiary here. You’ll be able to choose the color of the phone’s wallpaper and add your Google ID via Moto Maker. Still, if you don’t like the end result much, Google will also replace your phone within 2 weeks. The service won’t be available until next year though. 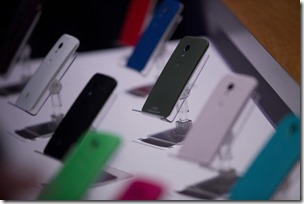 Here are the specs of the Moto X:

The phone will be available via a contract in late August. International availability will start from Canada later on. While this phone is lacking a bit of pace on the hardware side, the great customizations alone will find it customers. The Moto X makes even the Lumia series look dull.