Amid the coronavirus crisis, almost all of us have heard at least once that the doctors have been ordered by the government to give poisonous injections to the patients that come in for treatment.

You might have heard a different conspiracy theory, but yes, our basic human instinct of making up stuff for something we don’t understand has yet again won. 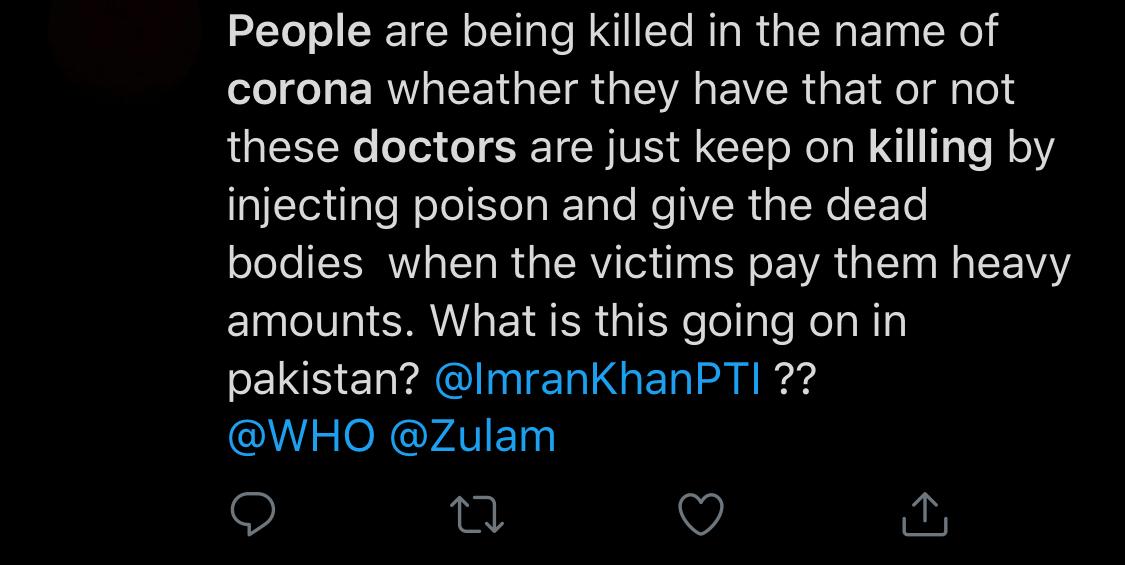 Doctors have been reporting that people that come in for treatment refuse to get tested for the virus because they believe such theories.

Let’s take a step back. Do people really think that this is happening? Are these the same people who were saying that there is no such thing as COVID-19?

What the hell is going on in the Pakistan?
The doctors are killing people.
I think corona is fake@MaleehaHashmey@ImranKhanPTI @mubasherlucman @Arysabirshkir #PakvsEng #coronavirus pic.twitter.com/pDaAyA04Hq

For starters, a majority of the people saying such things have not witnessed it beforehand. They haven’t lost anyone to COVID-19 and thus the baseless accusations on the system and the healthcare professionals.

While the doctors are giving official reports that there are so many corona patients that the health system might just collapse, the layman is adamant that coronavirus is nothing but a plot to get money from the World Health Organization. Each body is sold for $10,000 or so, the people are saying.

The government, on the other hand, is stuck on whether or not to impose a lockdown. As the pressure from the elite class is mounting, it becomes difficult for the poor to make ends meet with such restrictions in place.

This video shows the dilemma confronting our govt today: On the one hand we have the masses who are not taking the COVID19 pandemic seriously & on the other hand, understandably, we have our frontline doctors & health professionals, who are at great risk, & some of our elite pic.twitter.com/AEhs2V62Oq

In a video, Doctor Tamkeenat Mansoor warns people to stop listening to people who don’t know anything about the virus.

Despite the fact that first-world countries like the United States of America, the United Kingdom, Italy as well as others are having a hard time containing the virus, Pakistanis are busy spreading fake news and rumors regarding COVID-19. It is heartwrenching to see ignorant people making up stories and sharing them in WhatsApp groups. Not just this, the recipients of such messages keep forwarding the fabricated lies without looking into the details.

Here’s a recovered patient trying to knock some sense into people who believe that COVID-19 is one big lie to get funds from the global bodies.

These are desperate times and everyone should be playing a part in containing the virus instead of persuading people to believe in such theories.

But because we believe in conspiracy theories, we are suffering as a nation without an end in sight for the deadly pandemic. The same doctors who were hailed as heroes when the pandemic hit the world are now being abused. They are risking their own lives to save ours only to hear bad things about them from those who don’t care whether the world goes to hell or not.

Life is far more precious than a few thousand dollars and doctors, more than anyone, understand this very well. If they were hungry for money, they would look for options elsewhere and not in corona wards in our messed up hospitals.

It’s never too late to get your facts right and everyone can still play a constructive role in containing the spread of the virus. If we are not careful, there will be more deaths than anyone of us would have ever imagined. No one wants to lose a loved one, do we? Maybe its time to stop believing in rumors and take care of ourselves and everyone around us for a better tomorrow.

Do you think doctors are really doing such horrendous things for the sake of money? Let us know in the comments.

The post Coronavirus Conspiracies Are Putting Lives at Risk in Pakistan appeared first on .