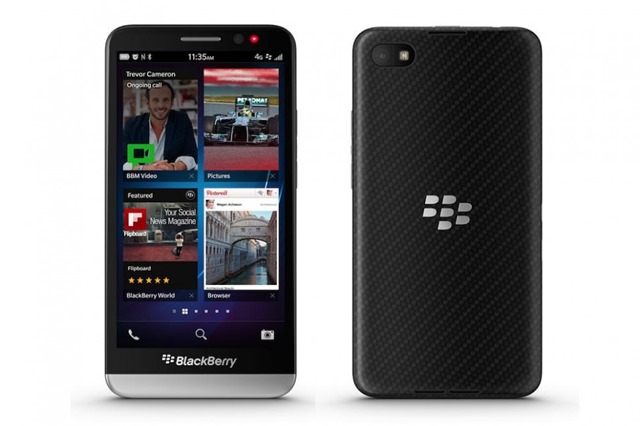 While the BB10 OS was meant to turn the smartphone battle into a four-horse race, the response of the phones running it so far has been lukewarm. Lack of quality apps and high price have plagued the sales of the OS and as the market has become more and more saturated with time, there’s really not that much of a need for another mobile OS.

Still, the company has taken to the challenge by announcing its 4th smartphone running BB10 called the Z30. The smartphone isn’t radically different from the Z10 and comes with a larger display and SnapDragon S4 Pro processor.

The design of the phone is based on the Z10 and comes with no hardware buttons at the front. The 5 inch 720p display takes up a large part of it with the speaker, front 2 mp HD camera and a notification LED at the top. The display is a Super AMOLED panel.

The processor inside is of Qualcomm SnapDragon S4 Pro variety, clocked at 1.7Ghz. It’s followed by 2 GB of RAM, Adreno 320 GPU and 16 GB of storage, which also happens to be expandable this time.

The camera at the back is the same 8 megapixel unit with LED Flash and 1080p Full HD video. For connectivity, Bluetooth 4.0, microUSB 2.0, NFC, dual-band Wi-Fi and LTE are used.

There are some minor changes compared to the previous smartphones though. Running OS version 10.2, it comes with BB Priority Hub which is BlackBerry’s take on Gmail’s Priority Inbox and this time, the BB10 messages can be sent without having to close the current running app. Incoming messages can be seen directly from the lockscreen, while support for Wi-Fi Direct and multiple alarms is also home.

Here are the full specs of the BlackBerry Z30:

The phone is expected to hit the markets in the coming few weeks. Pricing is unknown as of now.

The post BlackBerry Announces the Z30 Smartphone appeared first on .