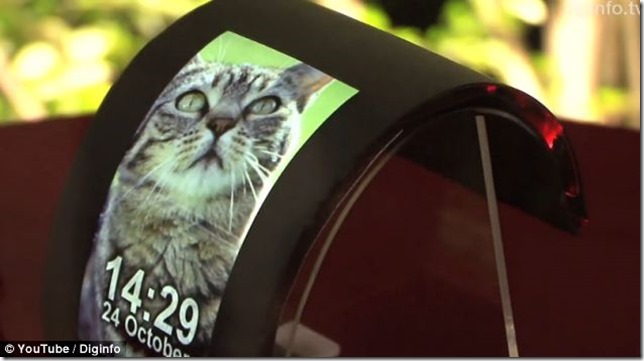 Until now, the only serious effort in making curved display smartphones has came from LG and Samsung and that too, without any offense, looks only half-serious. The implementation is off the mark and the products themself don’t look too comfortable for daily usage.

Now though, something has arrived which can make even the most indifferent of people pay attention: the world’s most bendable mobile display. Its maker, SEL (Semiconductor Energy Laboratory), claims that it can bend to a record-shattering 4mm diameter and revealed the technology at the FPD 2013 show in Japan.

SEL is also the same company which made IGZO displays a reality.

The prototype unit was a 5.4″ mobile display with pixel density of 302ppi. The new display is more reliable and designable than a conventional OLED as it uses CAAC oxide semiconductors which are crystalline and not amorphous. As a result, these displays can be rolled towards the sides and at the top of a smartphone, or even at the back – if required. Still, they look just as good as an OLED screen.

Another thing which is increased is durability. Since the crystals are continuously aligned, they don’t get bothered much when they’re bent.

SEL also showcased a 3.4″ display with pixel density of 326ppi, which is again quite a feat. The bendable display also comes with a bendable Li-ion battery which has been tested as much as 10,000 times. A 13.5″ bendable OLED display with 4K resolution for televisions was also shown off.

Technology like this is worthy of being implemented on our mobile devices. We really hope to see it soon on them.

The post Bendable Display that Will Turn Your Entire Phone into a Screen appeared first on .