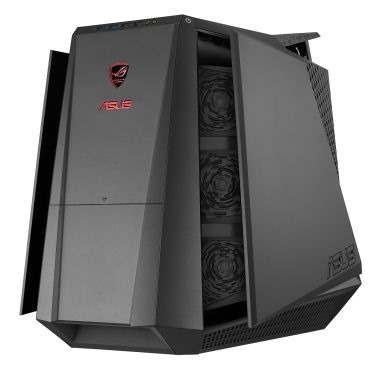 How many PCs out there can hold as much power as a Lamborghini right now? You’re right, not many.

This, however, might be the Lamborghini moment of computers in their history. The ASUS Tytan G70 is one of the most powerful computers to be announced lately and fits the bill of the fabled Italian supercar quite perfectly: fast, bizarre and uncommon.

First thing’s first, the design is itself unique. It weighs 24 kilograms, far from anything close to portable (and rather un-Lamborghiniish). You get a big LED-lit, color-changing logo on the front.

The top houses a wireless charger. On either side are movable flaps which resemble a hypercar’s scissor doors. Why are they movable? Of course, they house two shy of a dozen cooling fans inside which come to life as soon as you activate the “Turbo Gear overclocking mode” by a press of a button. It is, in simpler words, Turbo boost.

On the inside, you get internal water-cooling (seriously, how much heat does this thing produce?). It has a 4th-generation quad-core Intel Core i7 processor, along with the latest Nvidia GeForce GTX780 GPU which supports up to 4 displays and 3D gaming. That’s alongside up to 32 GB DDR3 RAM and 15 TB of hard drive storage.

Here is the complete run of Tytan G70 Specs:

But what about the price? That hasn’t been revealed yet, but it will quite easily go above the $1000 mark. Then again, what can we do for Lamborghinis don’t come cheap!