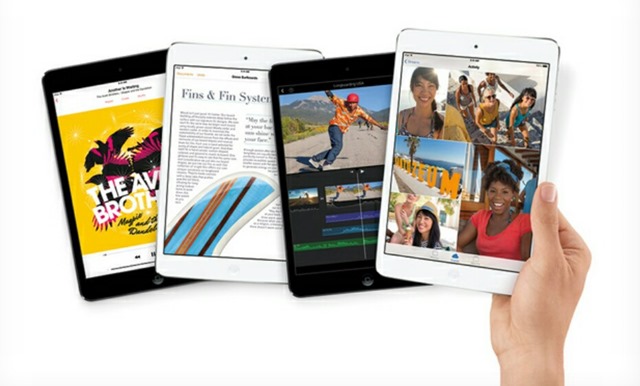 Apple has made it public yesterday that it has sold 170 million iPads in the product’s life cycle so far. According to estimates, the Mini holds a large marketshare amongst them all, so when Apple finally made the smaller tablet public last year, it really did recognize the screen size’s importance. And it has further made that fact clear.

When the time came to announce the second-generation of the tablet, they needed to deliver strongly and that’s exactly what they did. But not without a few compromises.

Under the cool metal, you get a 64-bit Apple A7 chip (8X faster with 72X faster graphics) this time, wish puts it right into the territory of the iPad Air and iPhone 5s. PowerVR SGX G6430 graphics are also making an appearance.

At the back is 5 mp camera with Full HD 1080p video at 30fps, along with a 1.3 mp camera at the front. Your connectivity options include Wi-Fi (two times faster through MIMO technology), Bluetooth 4.0, Lightning Port and optional LTE.

But wait, what compromises were made? Well, the iPad Mini 2 is 0.3 inch THICKER (yes that’s right) and 23g heavier than before at 7.5mm and 331g. (In case you don’t know, the same travesty occurred in the case of the iPad 3, which got cancelled after just seven months)

The old Mini will still be sold for $299 while Smart Covers will retail for $69. The tablet will go on sale from November 1.

The post Apple Announces the iPad Mini 2 appeared first on .