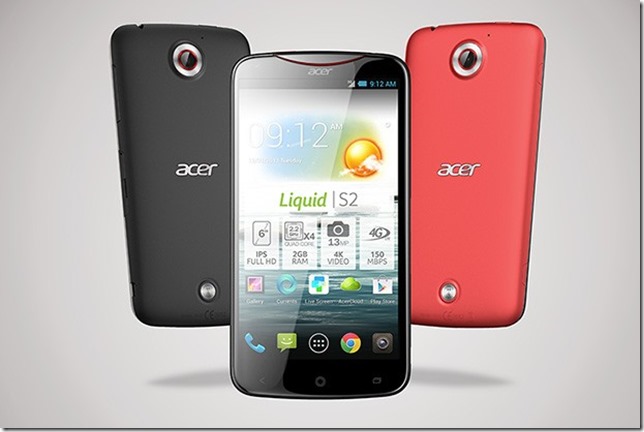 Acer hasn’t always been on the cutting-edge of smartphone technology but this time, they’re finally showing that they are serious. The new Liquid S2 which was shown off just before the IFA event is the world’s first phone capable of capturing 4K videos, the next generation of ultra-high-definition video, as well as plain old 1080p video. Not only that, the camera also features several other high-tech shooting modes.

The phone itself is no slouch either. Boasting a giant 6 inch Full HD display, the Liquid S2 also features a 2.2Ghz quad-core SnapDragon 800 processor under the hood. That’s accompanied by 2 GB RAM and 16 GB of storage, expandable by up to a stunning 128 GB via microSD card slot. If you’re buying this phone solely for its camera, you’ll need it!

Talking of camera, the unit here is of 13 megapixels. It’s a 28mm wide-angle lens with a BIS sensor and can take either 4K Ultra HD videos at 30fps or Full HD 1080p videos at 60fps. Now those are some serious numbers.

The camera is also capable of taking 27 megapixel panoramic photos and 4x slow motion videos. Alongside the camera is a ring-flash, which as evident by the name, is LED Flash in the shape of a ring surrounding the lens. The front-facing camera is a 2 megapixel sensor with an ultra-wide BIS sensor and capable of shooting Full HD videos.

The phone runs on customized Android 4.2.2 Jelly Bean and has a large 3000 mAh battery underneath it. Here are the full specs of the phone:

The Acer Liquid S2 will be available in October for an unknown price tag. Boasting a ground-breaking camera and SnapDragon 800, we’re not expecting it to be cheap but it feels good to see a ground-breaking package from a relatively unknown manufacturer.