A Pakistani hacker, who wants to be called as H4$N4!N H4XOR, claims to have gained access of Aaj.TV – the official website of Aaj TV – and has leaked the entire website data online, including user names, passwords, email addresses and other private and sensitive data of the website.

Hacker in a communication with ProPakistani said that website was intentionally not defaced, instead just a warning email was sent to the webmaster, and leaked data was presented to him as a proof.

Same hacker had previously defaced 8XM and Geo.TV. He contends that Pakistani webmasters are too lame with the security and these attempts should be translated as warnings to ultimately secure Pakistani cyber space. He urged Pakistani websites to be more securer.

On other hands, the webmasters criticize hackers for penetrating into their websites without authorization and approval. They term it criminal activity.

Hacker provided ProPakistani with login information for one of Aaj TV’s recruitment portal (and of course the entire leaked data), a screen-shot of which is produced below: 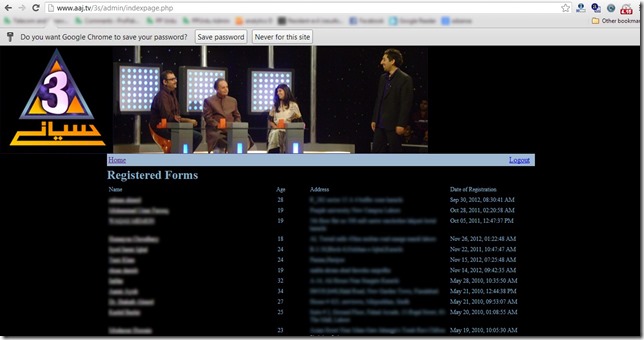