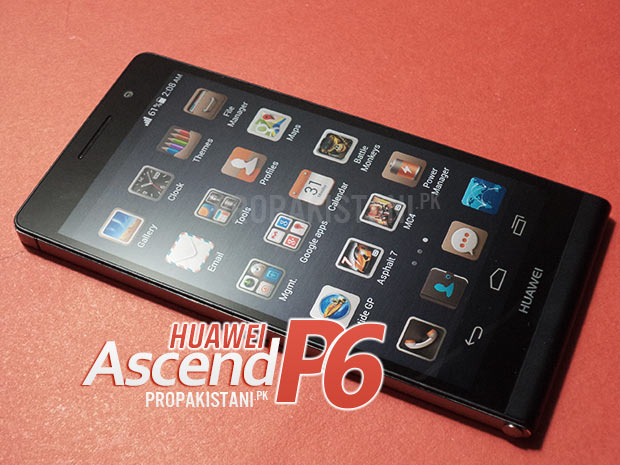 Ascend P6 is the latest flagship device from the Chinese manufacturer Huawei, which claims it to be the world’s thinnest smartphone in the market today.

This phone grabbed much attention even before its launch – thanks to all the leaked images, specifications and then with an official teaser from Huawei.

Ascend P6 was unveiled last month in London and is now available for pre-order in Pakistan at discounted rate of Rs. 37,000. The phone is set to launch at the end of this month by Airlink Communication and will be available in 3 colors: black, white and pink for an expected price of Rs. 40,000.

Lets get straight to the un-boxing and hands-on video:

The first thing you will notice about P6 is that it is extremely slim and very light weight (120g) despite all that metal stuff. There is no doubt that this phone takes a little inspiration from iPhone with its squared-off body, flat glass front with aluminum edge and little black lines breaking up the band but that doesn’t mean its a complete knock-off.

Ascend P6 phone has a unique slim shape and with a rounded bottom and brushed aluminum back, which gives it a premium feel. 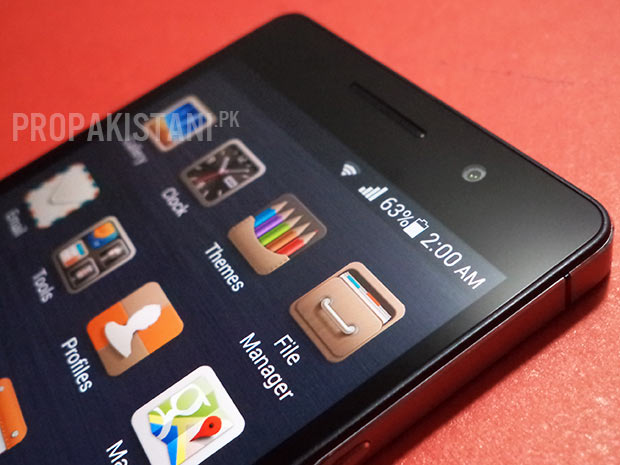 You may wonder that why Ascend P6 is called P6, as its the third device in the P series by Huawei so it must be named P3? Well I think that’s because this phone is only 6mm thick (6.18mm to be exact) almost 3.1mm slimmer than HTC One (another metal bodied phone). 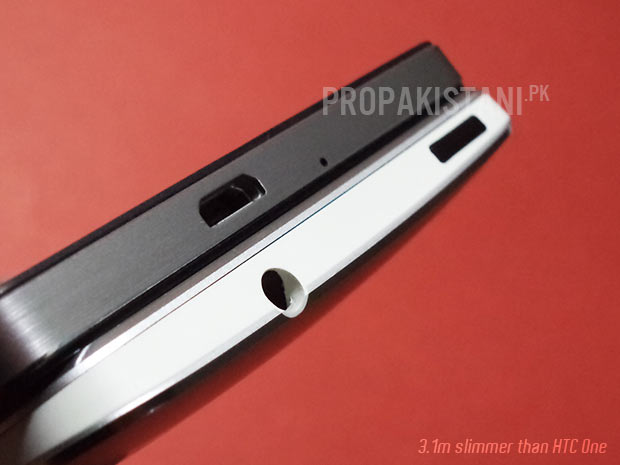 On the front we have a 4.7″ IPS in-cell LCD screen with gorilla glass protection. The bezels are very thin, adding beauty to the design. You can also use the phone while wearing gloves with the gloves mode turned on, which actually increases the responsiveness of the screen. 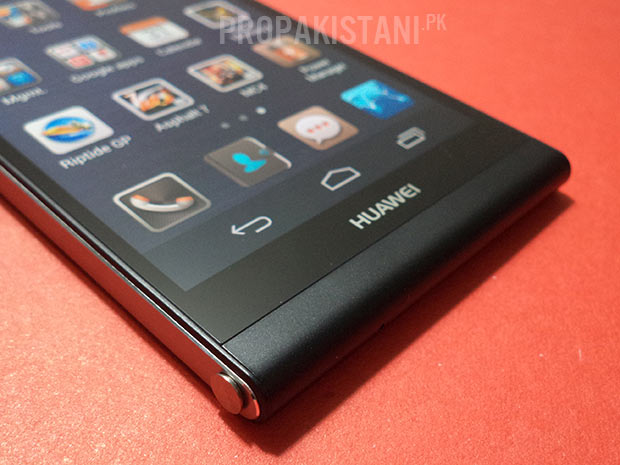 Above the screen there is notifications LED, light sensors, ear speaker and front facing camera. The Huawei logo is pushed below the screen this time and microphone is located in the rounded bottom. 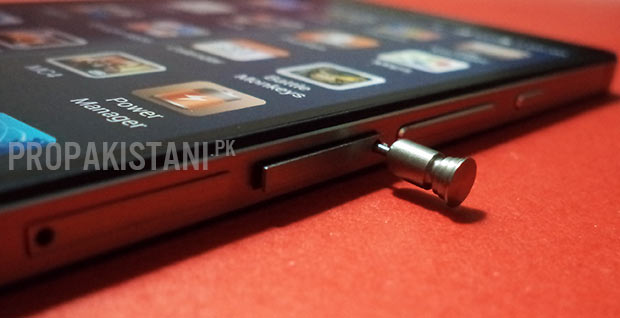 On the top there is micro USB / Charging port and noise cancellation microphone, which is quite unusual. The power/unlock button and the volume rocker is placed on the right with microSD and SIM card trays.

On the left side there is a metal button, once removed it turns out to be the trays ejector tool, it is actually plugged up in the 3.5mm headphone jack. It looks quite stylish and serves the purpose well, but you may lose the pin when using headphones – so be careful. 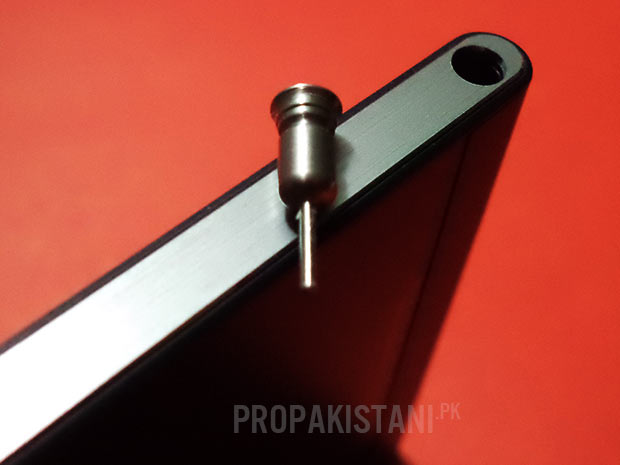 The brushed aluminum plate on back is non-removable. Primary 8MP camera with single LED flash light is located on the top left, with Huawei logo in the center and loudspeaker on the bottom left, which is quite loud and impressive, enhanced by Dolby Digital Plus. 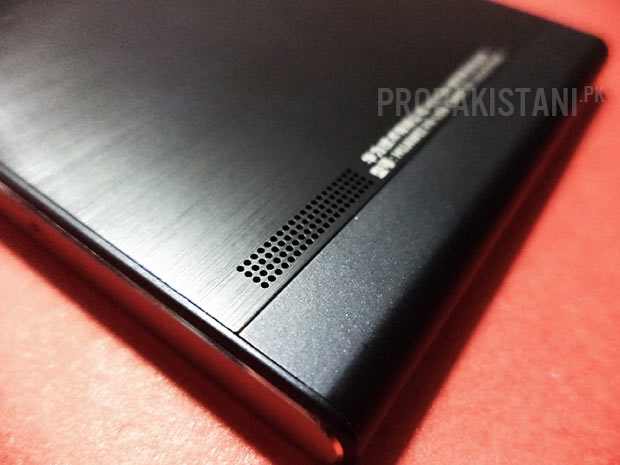 One thing you will notice is that there are no LED touch sensitive menu keys on the front, rather these are built into the UI and you will see them at the bottom of the screen. 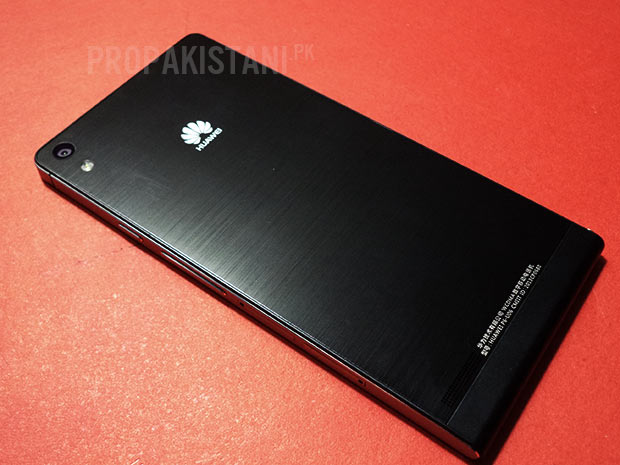 Huawei Ascend P6 comes with the latest Android Jelly Bean 4.2.2 out of the box, and just like all other Huawei phones on top of Android it runs Huawei’s home baked – Emotional UI. Ascend P6 is loaded with the latest version of Emotional UI i.e. 1.6, this version includes all the basic features as well as some motion gestures and permissions manager. 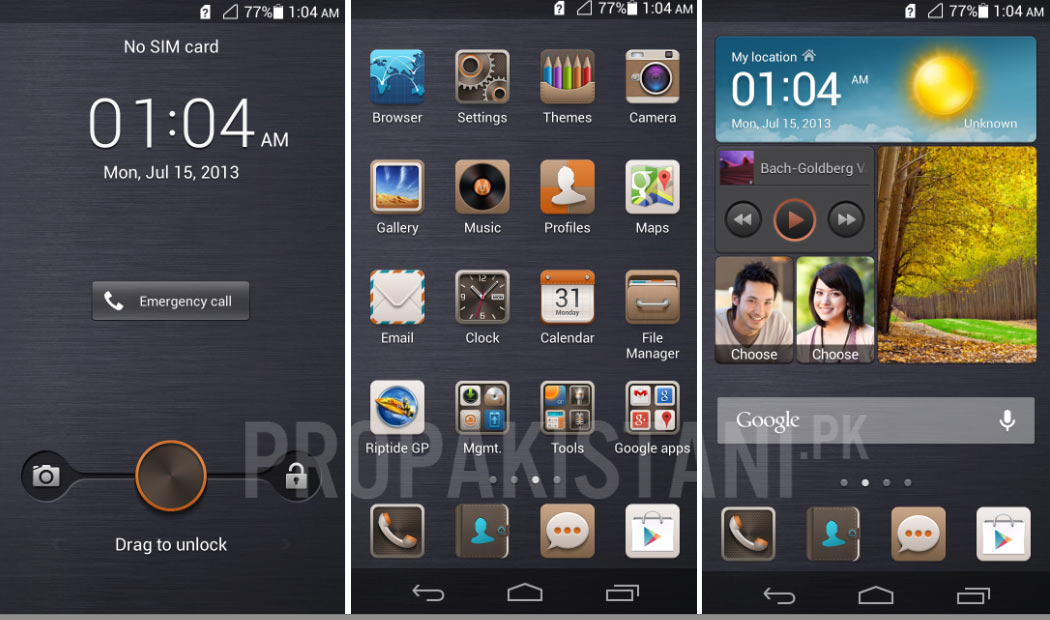 In Emotion UI there is no app drawer, and everything is on your homescreen, with no shortcuts. You can add unto 9 homescreens and arrange your apps in folders if you like. You can also add widgets on the homescreens.

Huawei has added some custom widgets including the ones that come with stock android. The notifications toogles provide quick access to services like Profile, Wi-Fi, Bluetooth, GPS and Brightness.

You can set 9 toogles buttons in the top row. 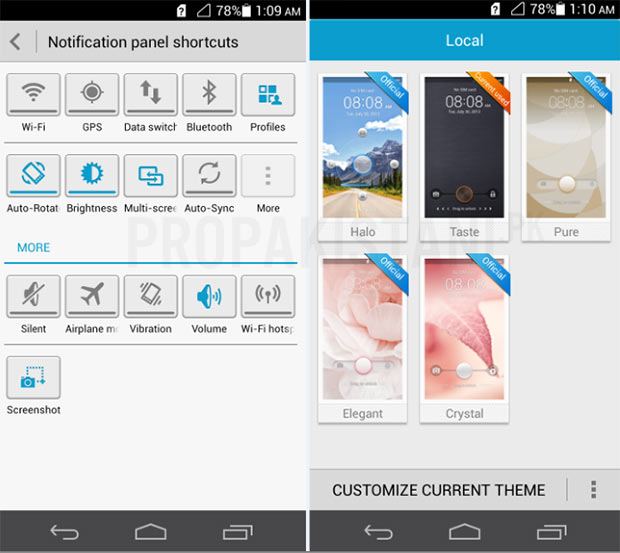 You can change the look of your homescreen and icons by choosing from 5 preloaded themes or you can download and customize any theme according to your taste. The themes also changes the lock screen layout if your are using Huawei lockscreen. The screen menu also offers different kind of transitions and widgets.

Emotion UI 1.6 brings a white theme for settings and notifications toggles with a custom dialer and keyboard to match the layout. The new features in this version includes motion control, which allows you to mute the phone by flipping or reduce the ringtone volume by picking up the phone and Raise the phone to ear for answering or making calls. It also includes the Shake to change wallpaper from the previous version of EMUI. 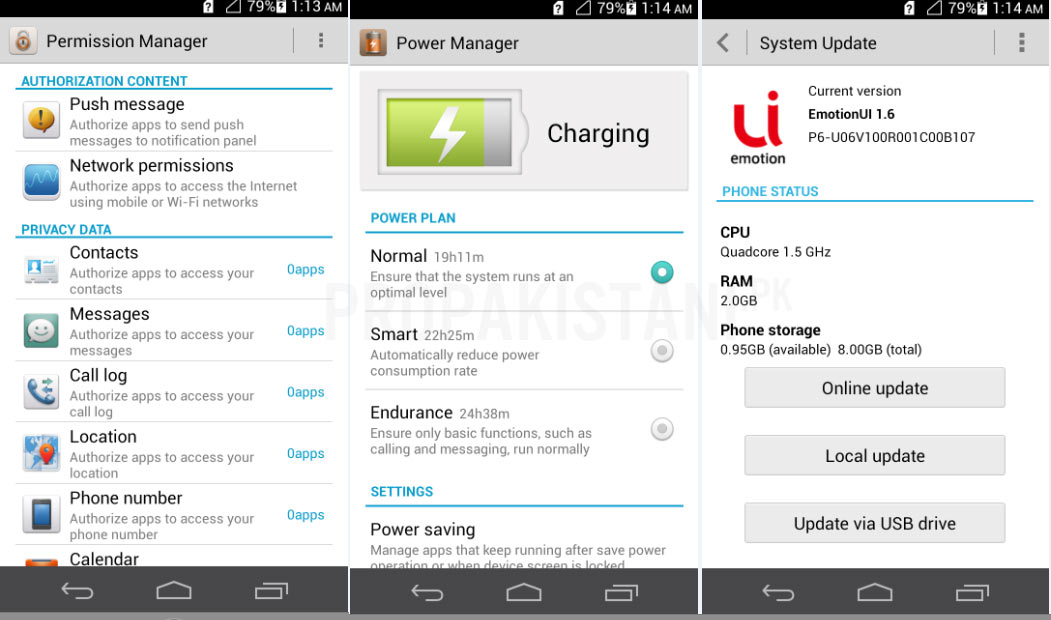 The other new and useful feature is the permissions manager, which asks for your authorization when an application tries to collect your phone contacts, SMS, location or connect to Internet. This is much needed feature for most of the Android users as now you can prevent specific apps for accessing your personal information or sending push messages.

Power Manager  helps you choose the right power settings for your device from three customizable modes – , Normal, Smart and Endurance. It also includes start up manager and display color tones.

Ascend P6 is powered by HiSilicon K3V2 quad-core SoC clocked at 1.5GHz with 2GB of RAM. The chipset architecture isn’t very advanced and the latest devices like Galaxy S4 and HTC One, running on Cortex A15 or Krait can easily beat it in the benchmarks but Ascend P6 indeed does the job well.

You won’t feel any lag while scrolling the homescreens, browsing websites, running multiple applications at the same time.

It can play almost any resource hungry game or app, but its possible that you will get low frame rates in some games. We tried games like Asphalt 7 and Modern Combat 4: Zero Hour and the playing experience was great. The phone gets extremely hot while opening some apps but Huawei assured that its a software glitch that will be fixed before the launch. 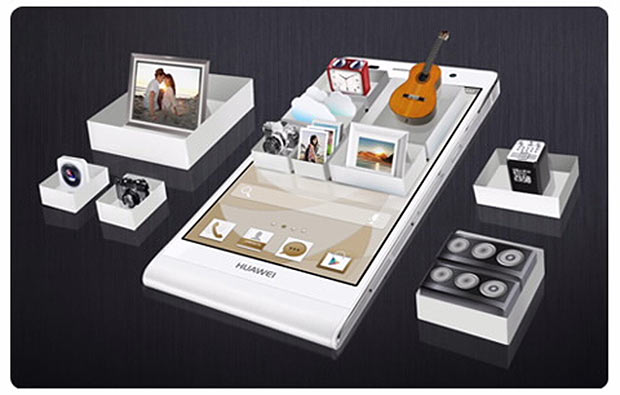 The phone can easily run HD videos and VoIP applications like Skype and Viber works just fine. The regular calls and texting is also flawless and you get good signal reception as well as the Wireless connectivity is very quick.

On our benchmarks tests Ascend P6 scores were almost the same as Ascend Mate, which is packed with similar hardware.

Have a look at the benchmark scores, which are quite satisfactory for a device in this price range as the real life performance of the phone is very excellent: 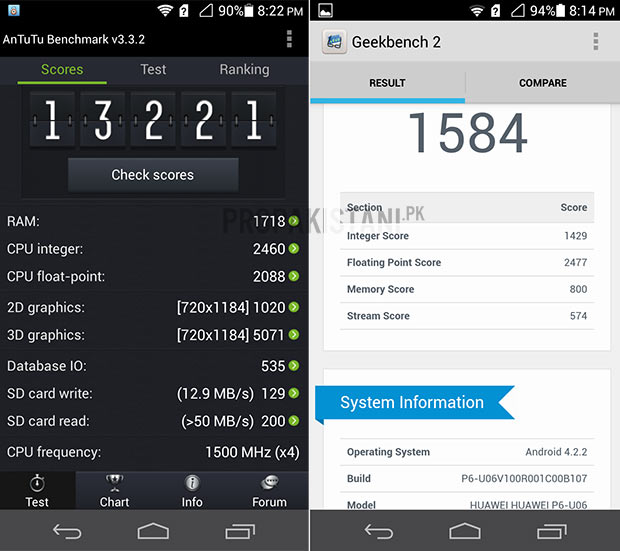 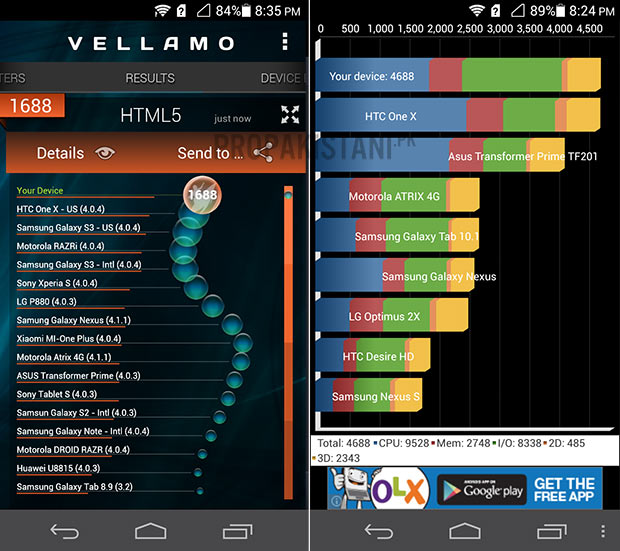 Huawei has introduced a special facial enhancement feature which smooths out wrinkles and other marks from your face and provide a gorgeous self-portrait a.k.a ‘selfies’. 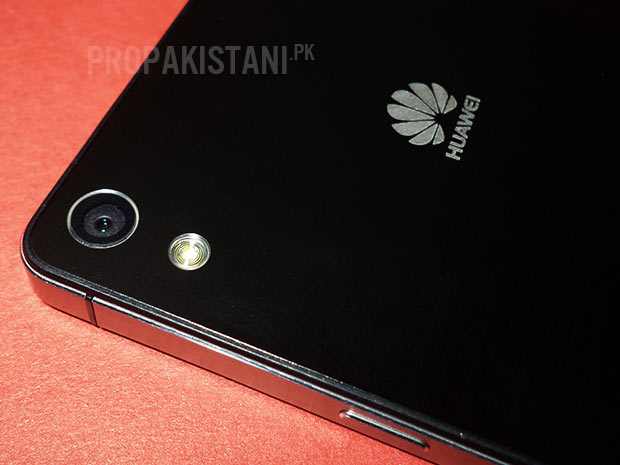 The primary 8-megapixel camera with a f/2.0 aperture also does the job very well. The 4cm macro capability allows you to get up close and personal with your shots. It works great for those who love to shoot objects like flowers and insects.

The camera performance is good, it handles varying colors, textures and light sources very well. The image detail in normal and macro modes is great and the contrast and sharpness of the screen makes the images look alive.

The interface is pretty simple and mostly based on stock android. There are some image quality related settings, effects and shooting modes available to select from.

As there is no dedicated camera key so you van use the volume rocker as the physical key. Use the volume down key to focus and press the volume up to capture, keep the button pressed for burst mode taking multiple shots continuously. 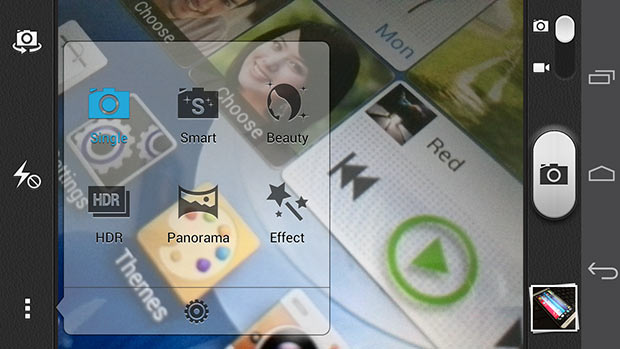 There is no zoom slider and you have to use the pinch to zoom function for zoom in or out. The primary camera also offer beauty shots as well as HDR, Panorama and Smart image modes. 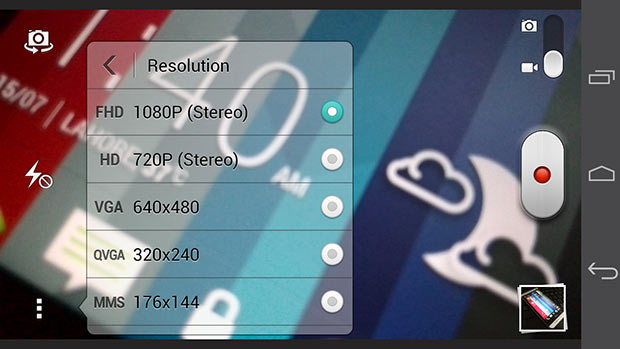 The Camcorder interface is similar to the Camera. Videos are encoded in MP4 and the quality is very good. You can also turn on the LED light if you are recording in a dark environment.

Ascend P6 is packed with a 2000 mAh battery which is quite usual in the quad core phones these days, but Huawei claims that Ascend P6 power saving technology improves performance by more than 30%, compared with smartphone batteries of equal size. The antennae equipment is packed into the plastic section on the bottom of the device which preserves battery life. 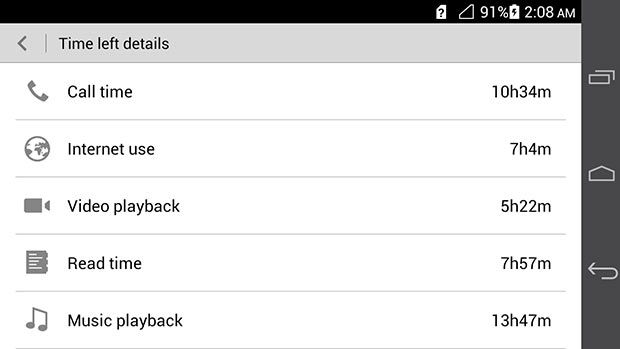 If you drop down the screen brightness and remain just a little careful about the usage, you can easily use this phone for a single day after full charge. Though in our tests the battery drains much quicker than expected. The phone settings offer three different power modes as well as a battery saver application, so if you are low on battery you can optimize its usage by turning off unnecessary features and killing resource hungry apps.

Huawei Ascend P6 is definitely a star among smartphones, as CEO Huawei Richard Yu quoted it at the launch event in London. It shows that Huawei can put together a great smartphone to make an impression.

The things I like most about this phone are the slim design and premium feel. 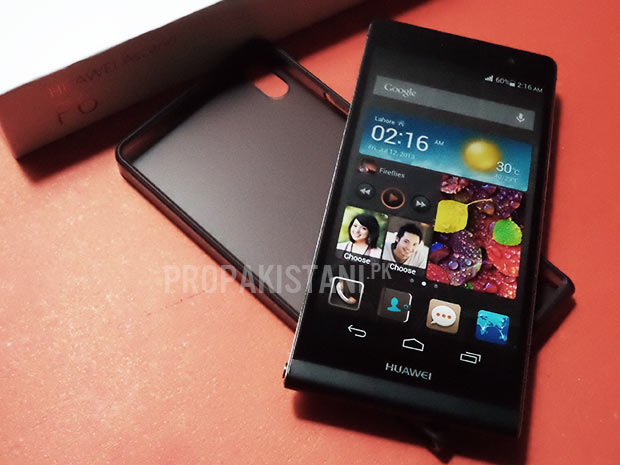 Definitely the hardware inside is no match to the top smartphones like Galaxy S4 and HTC One but it can be improved and you must consider that P6 costs much lower than its competitors (almost half the price).

I believe that if Huawei continue this path it can create trouble for Samsung and other players in the android market. 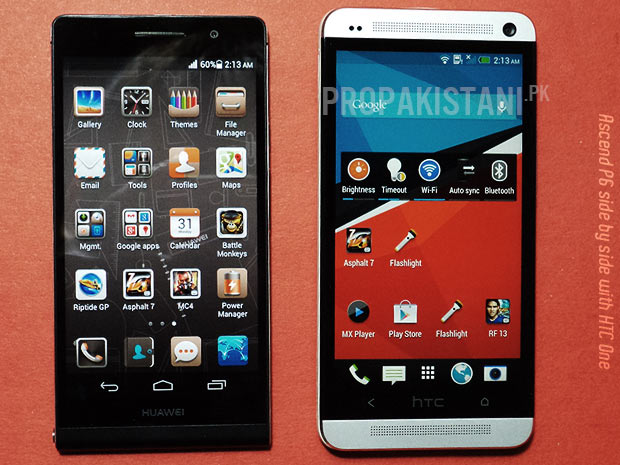 So if you are looking to buy a new smartphone with a limited budget and like to move away from cheap plastic phones, Huawei Ascend P6 is a great choice. It offers a premium design with all the features a vast majority of android users want.

Do share your opinion about the phone or if you have any questions feel free to ask us using the comment box below.